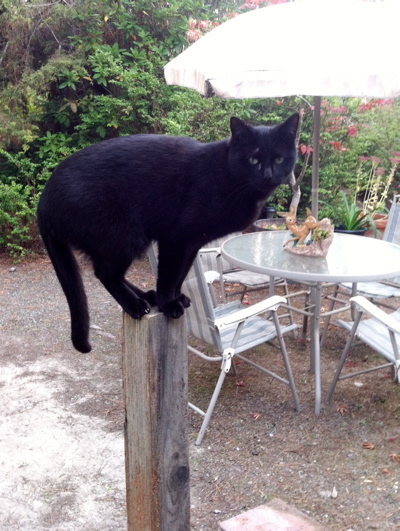 The handsome and agile Roscoe

One of the many great things about being in LA was the ability to sleep in until the sun was up – and it was always sunny. Back here in Hooterville (and probably in LA), it is the unlovely time of the year where 6 am looks just about the same as 12 am.

I hate getting up in the darkness as much as I like sleeping in it, and the worst part is having to keep the kitties in until that slacker Sol gets his butt up and going. I know the time changes this weekend, but will that make it better or worse? I can never remember and the mere thought of it is too mathy for my two brain cells, much like splitting a restaurant check. Whatever way it is, I will be discombobulated – more than usual, anyway – by the overnight flight to Atlanta.

I think this is how we humans cope, by forgetting how cold and dark the winter is and how hot and sunny the summer is and the fact that we all have an expiration date. Every year I seem to be surprised by how “early” it gets cold and dark.

This week, it has been cold enough for me to put the heat on when I get up, and it serves as something of a pacifier for the cats as they bask in front of it and stop asking to go out. Even Audrey is not immune to its charms, though it palls on her faster than it does the boys and I cave in to her insistent insistence. That’s Audrey. Yesterday I happened to catch her rearing up on her back legs and chasing poor Luna away. It was like a real life cartoon as the 75 pound dog fled in horror from the tiny, stripy cat.

Even Audrey has been sleeping with me at night, though at the foot of the bed. The mysterious Mr. Roscoe loses his usual aloofness and cuddles right up to me all night. Sometimes he doesn’t bother to get up if it’s too cold for his taste. Surprisingly, Clyde, the mama’s boy, has been sleeping on the couch, though he does climb up on me for cuddles while I drink my coffee.

The boys seem to have been going through a rowdy phase. You may be able to see that Roscoe is missing some fur above his eye, and also sports a slightly torn ear on the same side. This morning, I noticed a chunk of fur missing on the back of Clyde’s neck. I guess boys will be boys!