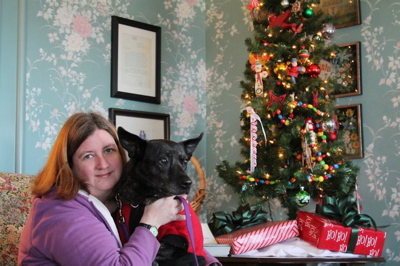 Schatzi disappeared two days before the eighth anniversary of our mother’s death. Is there significance to her leaving on the 8th day of the 8th month near the 8th anniversary of Mom’s death? Or that the 8th plus the 10th equals the 18th, when we lost our father?

Or is it all meaningless?

That day dawned like any other. I was on a conference call when I heard Megan clapping for Schatzi, the best method of summoning a nearly deaf dog from the quiet woods. When she was still clapping after the call, I went over to Megan’s house. Schatzi was conspicuous by her absence, and Megan had a bad feeling.

We spent the rest of that day and all of the next literally and figuratively beating the bushes, clapping and calling until our hands were sore and our voices rough. Schatzi was never gone for more than an hour, and she normally made a loop from Meg’s house to mine and through the haul road behind my house and back. We soon discovered that the other people on our property rarely saw her.

The next day, a clerk at the store told us that she had seen Schatzi about 9 am on Thursday morning, trotting down the Ridge heading toward our brother’s place. Another person said a friend of his had seen a dog matching her description that morning. We went back and searched the area again, and I made a flyer which we posted at the store and post office.

Megan and our friends Jennifer and Dave searched all day on Saturday. All we found was that our neighbors are super nice and helpful. Everyone took a flyer, and everyone called their local friends, relations, and neighbors to put out the word. The kindness of our little community was a ray of sunshine on these dark days.

The search goes on today, but after so many days with no food and no meds since Wednesday night, it’s only because our hearts can’t catch up with our heads. That’s going to take a long time, if it ever happens.

We hope that she chose to leave us rather than thinking that she got lost. She rarely left the property, and she has lived here for 12 of her 15+ years. She knew it like the back of her paw. And she was always a very stubborn dog, as well as one who was always more of a wild animal after her difficult start in life, abandoned in the desert, so it makes sense that she would follow her instincts to die alone, however hard it is for us to accept. The lack of crows and other such birds leads me to believe that she is resting peacefully in a little nest under brush so dense that no-one can find her. She knew those woods so well.

The first night she was missing, Megan dreamed of her all night, and Schatzi was happy in every dream. I think it was her way of telling Megan she is happy where she is. It reminded me of how I dreamed of my grandfather laughing after he died, glad to be reunited with his adored wife of more than half a century. John always said that dreams were visits.