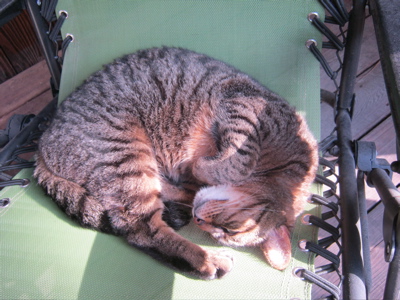 I have come to the conclusion that my cats do not approve of my sleeping in.

And by “sleeping in” I mean “getting up later than 5:30 am”, which is the default time for most of the week due to one reason (aquafit) or another (conference calls). Even in the dark depths of winter, I let Audrey out around 6:00. Now it’s light, even on foggy days, at that early hour, so one day earlier this week, I opened the doors and went back to bed.

Roscoe ignored the outdoors, and instead walked all over me. Literally. Eventually he settled heavily down, simultaneously pinning down the covers and making it hard to breathe with any ease. I tried to get him to cuddle with me, but he climbed back on my side and sat there staring at me. I gave up and got up.

Today I tried opening the doors and feeding them before going back to bed, figuring that Roscoe’s sit in was a protest against their unfairly delayed breakfast. They were eating when I headed back up to the sleeping loft. I was just dropping off when both of the boys climbed up on me and started kneading and jockeying for position on the coveted real estate of my body. Then a mosquito whined by my ear and I gave up on the whole thing.

As soon as I was up and making coffee, the boys took off. Mission accomplished!

Audrey doesn’t concern herself with such petty things as sloth and schedules, and as you can see from the picture, she has an advanced degree in R’n’R. In fact, she likes to hang out and nap for much of the afternoon after whatever incredibly urgent business she has to attend to first thing in the morning. But she can and does control me with the power of her mind. Call her Carnac the Magnificent.

Audrey, being Audrey, gets special privileges, which the boys understand and don’t seem to resent. They are definitely wary of her, though, and seem to expect her to be in charge. She’s the one who growls at Yellow Cat when he cruises by and chases away dogs and chickens with equal determination despite her diminutive size. The only thing that’s small about Audrey is her body. Her personality and stubbornness are huge.

For some reason which I cannot now remember, my brainette looking pretty much like Miss Havisham’s attic and full of useless things like 1970s pop song lyrics and the difference between “carat” and “karat”, I started giving Audrey a spoonful of wet food in the morning. She has come to expect this service, and will sit on the back porch and stare at me with her huge, clear green eyes until I give it to her. She never makes a sound. She doesn’t have to. She is Audrey the Magnificent, controlling me with the power of her sleek, Scandinavian loft furnished mind.

She also has superpowers of stubbornness. Yesterday she was napping on the bed in keeping with her daytime snooze schedule. I moved her off it to make the bed, to her vocal disgust. She jumped right back up. I put her off again, and before I could even drape the blanket over the sheet, she was on the bed again. I ended up making the bed over and around her. When I was finished, she emerged from under the covers and went to lie down again on the exact original spot I have moved her from, staring at me in disgust before settling down to resume her interrupted beauty sleep.