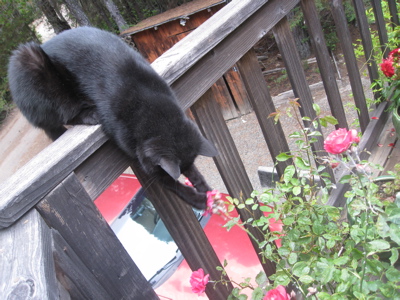 Why stop and smell the roses when you can play with them?

You will be glad to hear that everyone is improving. Jessica learned to crutch around pretty quickly – always her way of learning everything – and is in the capable and loving hands of her mother at home. Jonathan is coming up with science experiments for her to do while her slim limb recovers, and I have ordered her a book of paper projects. I think she’ll love that it’s called “The Secret Society of Paper Cuts”.

Megan, of course, was back at work Monday night. She said that bugs that violent rarely last very long, and despite my attempts to dissuade her, she worked on the family garden on Sunday as well as checking in on Clyde twice and reporting to me while I was at work. She was a Montessori teacher before she was an EMT/ambulance driver and has worked in the ER for years now, so she has a really kickass immune system. Still one more night of work for my valiant sis tonight. I don’t know how she does it.

Clyde is almost his old self again. I first noticed he was sick on Saturday night. He looked all bleary-eyed and was non-responsive. In the morning, he walked downstairs in slow motion. He ate and drank as usual, but he seemed out of it and not at all like himself. He went outside and huddled there like an uncomfortable loaf of bread. He wasn’t grooming, not purring, his head and tail were drooping, he slept a lot, walked around slowly, and, perhaps most remarkably, no naughtiness.

By the time Monday rolled around and he was pretty much the same, I called the vet. Dr. Karen is in Italy with her family for three weeks, and Dr. Carl is (not surprisingly) booked for a week. So Dr. Barbara saw Clyde. She gave him a complete blood panel and checked everything out. $200+ later, it seemed that everything was A-OK, except for, you know, the whole sick thing. And his potassium levels were a little bit low. Since he couldn’t (or wouldn’t) eat a banana, Dr. Barbara gave him a subcutaneous infusion of potassium. It was a relief to know that nothing major was wrong, but I still wish I’d gotten a definitive diagnosis.

Clyde was very brave and stoic. I should really stop thinking of him as a baby boy. And? He weighs 11 pounds! I would never have guessed!

Clyde seemed better the next day. and started clawing the couch again. I never thought I’d be happy to see or hear that! Or his jumping on the counter. He finally climbed up on me and purred like he used to, and when I came home yesterday, he was all dirty from playing on the haul road, which was another good sign that he was getting back to normal.

Interestingly, Audrey stayed near him while he was sick, and Roscoe sniffed him thoroughly every time he saw Clyde. They also exchanged what I think of as little kisses, more than usual. Today they were playing in the sunlight, so I’m hoping everything is back to normal.