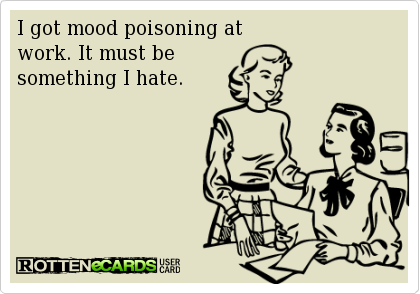 Well, yesterday wasn’t Friday the 13th, but it was Monday the 13th. And we all know Mondays are worse than Fridays!

Things were crazy at the jobette. We sent out ballots for Board nominations last week, and this week people started calling to complain about not getting theirs, or not getting enough, or something. Anything. In all cases, they were wrong and we were right, but this is not much consolation after being called “incompetent” and other lovely adjectives. I mean, I am, just not in this particular case.

A woman also called to complain about a fortune teller in the Village. She and her husband were visiting for his 70th birthday and decided to stop in and see a psychic. According to this visitor, the seer was “verbally abusive” and told them they should get divorced immediately. The visitor said that she and her husband have been married for 44 years and took exception to this suggestion. “I mean, I didn’t expect her to sugar coat it, but this was insulting!” I ended up giving her the contact information for the county entity which issues business licenses (do psychics have licenses?) and the Better Business Bureau. I wasn’t clairvoyant (or competent) enough to think of anything else.

A guy drifted in saying that he had been released from the jail in the county seat that day and hitchhiked here. He was looking for a private investigator and a lawyer to help him with the restraining order which had been issued against him. I suggested that he check with the police station and the court clerk, conveniently located in the same building. He said that he had to check in with the police anyway, so I guess that worked out. I am a little uncomfortable with my growing familiarity with restraining orders and other depressing legal proceedings. My neighbor is in the midst of dealing with such problems, and we as a family are trying to help her to the best of our ability, but there’s no doubt that it’s upsetting. I definitely think ignorance really is bliss.

I had a few work-related errands to do on the way home, and when I finally got there, the Leafs were ahead of the Boston Bruins by 4 goals to 1 in Game 7 of the first round of the playoffs. The Leafs haven’t won Lord Stanley’s coveted Cup since 1967, thus achieving the longest drought by any championship team in the NHL while simultaneously being the most valuable, earning more than $1 billion last year. They haven’t even made the playoffs in 8 years, so the fact that they were still in there fighting and had actually forced a game 7 against the Cup winners of 2010 was huge and inspiring. By the time I had taken off my make-up, gotten changed, fed the kitties, started dinner, and, more importantly, poured myself an adult beverage, Boston tied the game in the last 90 seconds of the third period. Boston went on to win in heart-breaking overtime, and I’m still stunned.