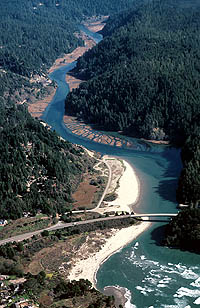 Usually, my idea of traffic is having to wait for two other cars to turn onto the highway from our rough country road – especially if they’re not related to me. Actually, the major annoyances for me when driving are people who drive below the speed limit and won’t pull over, and the people who jump out in front of me and then drive below the speed limit, usually when the road behind me is completely empty. Extra credit (or demerits) to the cars with “local” license plates frames who do all of the above and brake at every curve.

A few days ago, a cement truck overturned in the afternoon in what we call “Dark Gulch” – a low and curvaceous part of the two lane highway signposted at 15 miles an hour – and when I drove home more than four hours later, it was still a one lane road as they cleaned it up.

As you come out of Dark Gulch into the light, you now find signs warning of road work and flaggers. Only problem – at least for me – is that the actual road work is about two miles south of the signs, and more importantly, about a mile past my turn off. Those not in the know immediately start driving about 20 miles an hour in a 50 zone, annoying the Suzy who just wants to get home.

On the way to work on the same day as the cement truck spill, there was some kind of work going on at Big River bridge which required some kind of enormous drill looking thing and which also reduced traffic to one lane (the other side) or a total stop (Me). Not only did it make me worry about being late for work, it also deprived me of the not inconsiderable pleasure of sweeping across that curving bridge (see above) with the ocean on one side and the river on the other. In any weather, it lifts my spirit.

At the jobette, I learned that a movie will be filming on the notoriously zig zaggy roads around here in the first two weeks in April. The road to the city is a motorcyclist’s Mecca, and it just makes sense that it will be the filming location for Need for Speed, starring Aaron Paul, my crush from Breaking Bad. Oh, and Michael Keaton.

I was the only one who knew who Aaron Paul was, and although this was less shocking than the time that my boss brought in a Wines That Rock bottle with the iconic image from Pink Floyd’s Dark Side of the Moon and I was the only one who could actually identify the image (my favorite guess: “Is it some kind of gay pride thing?”), it was still a little surprising. Have none of you people seen Breaking Bad? And if not, why? Or more importantly, why?

Of course, I am scheduled to go to San Francisco on Jessica’s birthday, when filming is allegedly going to be complete, but I wouldn’t be surprised if it runs over, as filming is wont to do. Apparently the film crew will be equipped with helicopters to film the chase sequences, so maybe they’ll give me a lift if need be.