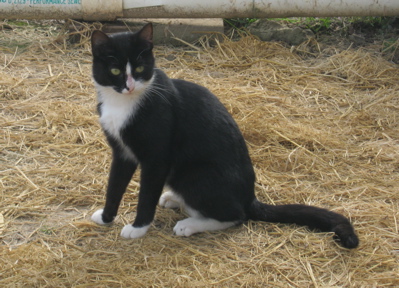 It was a Valentine’s Day spay for my brother’s mini-cat, Scout!

Since we do ♥ Scout, it was time to do the deed, before some amorous boy cat showed up. It’s unlikely in the depths of winter, but you never know. And you may remember that the precocious Miss Audrey went into heat before she was six months old (and that was delightful*).

Over the past four months since she made her surprising début, Scout has become accustomed to the fabulous lifestyle of sleeping inside and having food and pets on demand. And demand she does. If she wants to be petted, she lets you know. Despite her diminutive size, she has the loudest purr of any cat I have ever known.

At the vet’s, we learned that Scout is at least a year old, so our calculations about her age were pretty close. She weighs 6 pounds, so at this point, I think it’s safe to say that she will remain a cat-ette. I’m guessing that lack of nutrition as a baby (and maybe before that) has stunted her growth. Other than her smallness, though, she is in good shape.

She hid for a day after the surgery, but got over it surprisingly quickly. The other day, my brother saw her playing for the first time, batting a pinecone around in the sunshine. Now that she’s not in constant fear for her life and struggling to find food and water, she has time for things like that.

I’m so glad they found each other.

*A drawback of this look is that it doesn’t show hyperlinks, like on “delightful” and “Scout” in the first paragraph. Maybe I should bold these so you’ll know they’re there…