I slept in until 7:15 this morning! Audrey complained bitterly about the terrible service around here, but the boys decided to have breakfast before bounding out into the foggy morning.

Speaking of the boys: I may have solved the mystery of Roscoe’s head wound. The other day, I saw Clyde getting ready to pounce on his unsuspecting brother, and went to get the camera: 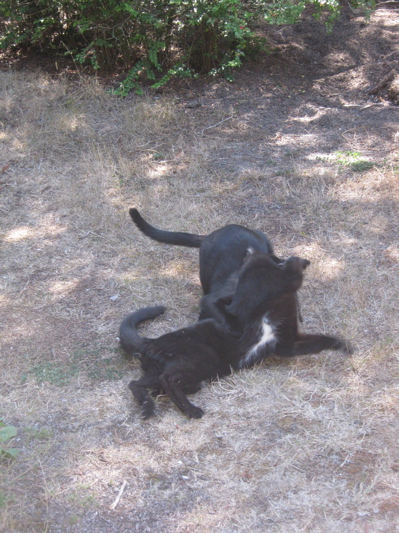 They play pretty rough, and sometimes one or both of them meows like it hurts, though I’m not sure that’s what it really means. The fact is they appear to bite each other, and their claws are pretty sharp, so my guess is that Clyde bit Roscoe, and Roscoe keep wiping at the wound with his wet paw until the fur came off and it got infected. The presence of a couple of claw-sized bald spots on his head and little puncture scabs on the wound area lend credence to my Poirot-style theory.

At least it’s healed up, and the fur is growing back. I wish they’d be more careful, but boys will be boys!

Digit’s new family is delightful. The daughter is eight years old and just fell in love with Digit, who is now “her” cat. I’m really happy for Digit, who is going to have the loving attention she deserves, but I have to admit that I had to go and sit in the car and compose myself before I could drive home after saying goodbye to her. I’m glad for her, but sad for me.

We had our last swimming class of the summer yesterday. Sallie is the best swimming teacher ever. I hope I can fit in more lessons in the fall, though it will be harder than ever since I will now be working on the weekends as well as longer hours during the week as part of Operation Save Suzy.

After class, Megan and I went to the old jobette office, where I picked up keys for the new office and was surprised to see that the phones were still there, along with all the plants and the outside garbage and recycling bins. Also there were a few bottles of wine and it seemed that the modem and its accessories were still there, too, though on arrival at the new office, it was clear that the interwebs were working there, so who knows?

Megan and I packed up her car with the plants and wine, leaving the phones and other equipment to the professionals. We spent about four hours unpacking boxes, breaking them down and stacking them in the alley, setting up my desk, the coffee area, and kitchen and bathrooms (finally, we will have men’s and ladies’ separate, and a janitorial service). The painter was there to touch up, and because it’s a small town, he is also the husband of Megan’s boss.

Finally, we got to the point where we couldn’t do more, so we locked up and went to the grocery store, where we picked up a few things for our brother as well as ourselves, stopping off at his place to deliver them and catch up, parting with hugs and “Love yous”, as we always do. As we headed home, I said to Megan, “We’re so lucky we have each other,” and she said, “You know it!”