Coming to you from San Francisco!

I’m drinking bad in-room coffee, but not at my usual modest motel, where there was, in keeping with the theme of this trip, no room at the inn. So I’m at a more expensive, but noisier and less nice place nearby. I had the middle seat for the long flight from Chicago to SFO, flanked by two very tall but very nice men. We arrived at the International terminal, for some unknown reason, so I had to line up for a shuttle to get to the regular terminal and retrieve my car. I hadn’t eaten since 4 am Pacific time that day, so I called Victor’s and picked up dinner on my way back to the hotel. It’s a good thing they are still open at 11:00 pm.

I don’t even know where to begin to tell you all about yesterday, especially since I can’t tell you, or my boss/partner what happened in the courtroom, just my lawyer.

I walked to our lawyer’s office in the 86 degree heat yesterday morning to be prepared for the coming ordeal (it turns out hat nothing can really prepare you for it, however). On the way there, I noticed this vacant lot which has been turned into a public garden, including vegetables: 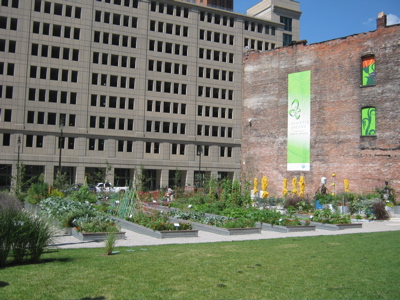 Downtown Detroit has many beautiful buildings, including the historic building where our lawyer’s office is located. On the 13th floor. Here’s the view from the conference room: 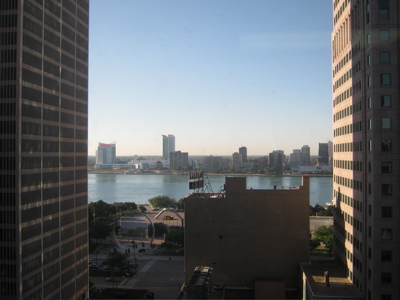 That’s Windsor across the Detroit River. I can’t tell you how tempting it was to hop across the river and take a train to visit my Ontario friends. So close, and yet so far!

At the appointed hour, we walked to the courthouse: 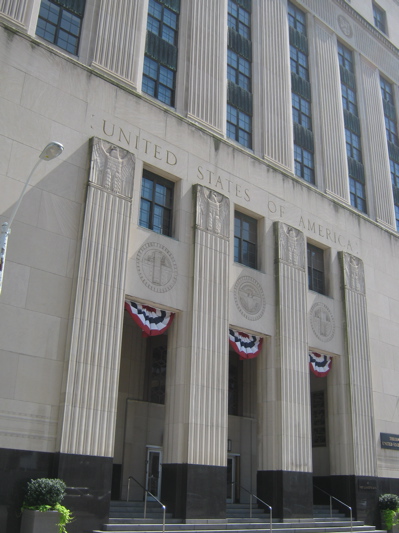 I had to leave my phone and iPod at the lawyer’s office, but still had to go through airport-type security at the courthouse. I waited about an hour and a half before I was called. Your lawyer is not permitted in the courtroom, so it’s just you, the prosecutor, and the jury. I walked into the courtroom with the US Attorney, stopped in front of the clerk, and took the oath you see on TV. Remarkably, there was no Bible to swear on (or even mentioned). Then I stepped up into the raised witness stand and spent the longest hour of my life answering non-stop questions into the microphone. I kept my eyes right on the US Attorney the whole time; I never even looked at the jury.

When I was finally excused, he gave me a lovely parting gift: another subpoena dated August 15. He explained that this is just in case they have more questions for me after they read all the documents our lawyers submitted to his office. Supposedly it is not likely that I will have to go, and I hope that is true. I was terribly shaken by the interrogation and now I know what to expect, I will be even more scared the next time. If there is a next time.

At least it’s over now: the courtroom, the delayed flights, the waiting around, the worrying. It’s a beautiful, sunny day in San Francisco, as as soon as I have breakfast and pack up the car, I’ll be on my way home, the most beautiful place in the world.

6 thoughts on “Nearly There”