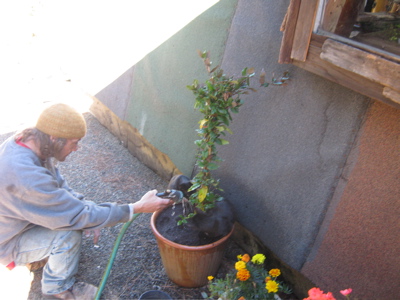 Rob watering my purple honeysuckle – and a young Clyde, October 2010

It turns out my feeling of doom on Tuesday was correct – Rob’s Mother died around 9:00 Eastern that evening.

I believe Rob was with her and his siblings. He called Megan last night from the Philadelphia airport between flights, and with the background noise of the airport and the always bad cell to cell reception, he kept cutting out, so they kept the call short. As I write on this sunny San Francisco morning, Rob is (hopefully) peacefully asleep at Clayton’s Garage Mahal* and Megan has probably let my cats out to play** and is waiting to hear from Rob on when to pick him up in Santa Rosa.

I’m glad that Rob reconnected with his sisters and especially his brother, Bill, who was just a child when Rob moved to California 30 years ago. They found that they had a lot in common, and Rob stayed at Bill’s house in Ottawa. I’m sure that they will keep in closer touch now, so something good came out of something sad.

*Clayton has a former, vintage mechanic’s garage which he used to live in. It has a little kitchen, bathroom, office, and a living space with a hammock slung under a skylight. He lives in an apartment around the corner, so the Garage Mahal is his guest house and party pad.

**Megan texted me last night to let me know all the cats were safely inside. Finally: an actual use for cell phones!