Also part of our Girl Day was getting a new (to me) couch! I am hideously excited about it. I have been looking for a replacement for my battered old couch for at least a year, so imagine how thrilled I was to find the couch of my dreams for about $250. The store even threw in the decorative pillows for free, and you know how I’m all about the pillows (I think I have eight or so on my bed), especially ones like these, which are gorgeously beaded.

But we had to get the couch from the Big Town to my little house.

On Saturday morning, Megan and I went to our brother’s place and swept out Rob’s trusty old truck. Jonathan has been using the truck while his car is being diagnosed at the shop. We are all pretty nervous about this, because Jonathan couldn’t figure out what was wrong, and that means that whatever is wrong will be really expensive. The car has nearly a quarter of a million rough and tumble miles on it, so it may also mean that Jonathan will have to join Megan in buying a new (to him) car. I really hope these things don’t come in threes, because I’ll be next.

We also took a tarp from the hay bales and realized that we would need a tie down to keep the couch in the truck. Fortunately, one of the tie downs Rob uses for garbage hauling was still in the truck, though one of the hooks was missing. Jonathan sailor tied it to one side of the truck and hooked the other side on. We were ready to go.

Almost as soon as we did go, we saw that the gas gauge was empty. The light was on, but no gas was home. We drove the five miles to the store, hoping for the best, and I put in $45 worth of gas to get us to the Big Town and back, with enough left over for our brother to get to work on Monday.

Arriving at the furniture store, two nice young guys put the couch on the truck, tightened the fastenings, and removed the cushions, putting them inside the cab of the truck, observing that we wouldn’t want them to fly away on the highway, something I hadn’t thought of and was glad they had.

We made our way slowly home, pulling over frequently, and arrived back at my hippie hovel with the couch still in place. Megan and I decanted the couch and the cushions, but we couldn’t move the old couch. Fortunately, Mark and his friend came over and moved the old one out (revealing a horrifying collection of dust bunnies, thirty cents, a lone pistachio, and a very small scorpion) and the new one in. It took them about two minutes all told.

Megan suggested that I keep the old couch outside until it starts raining, and then we can take it to the dump, instead of doing it now. So now I have an outdoor living room: 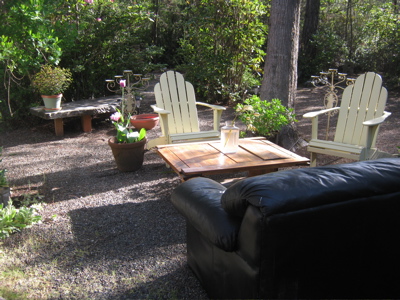 And a much-improved indoor living room. Here’s how it used to look: 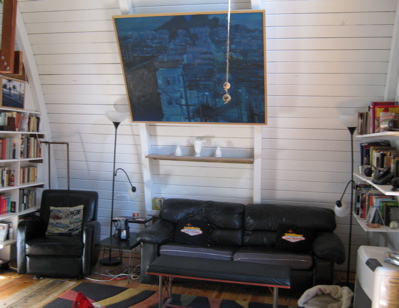 And here’s how it looks now: 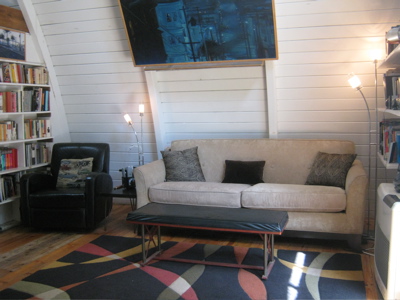 You may also have noticed that I have new lamps, meaning that my whole house is now officially an IKEA-free zone.

The cats approve of the new couch. It now doubles as Audrey’s and Clyde’s bed (Roscoe still prefers the top of the armoire), and Audrey lounges on it during the day as well. I think she has noticed how well the beaded pillows complement her fur: 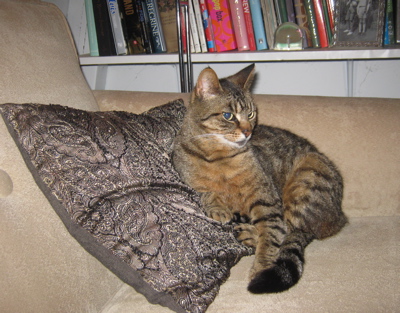 As for me, well, I think it gives the place some much-needed civilization.