Everything seems to have been too strange for too long.

First there was Rob’s difficult trek to his Mother’s bedside, then it was Megan’s birthday and he wasn’t here, then it was Memorial Day and I didn’t have to work but Megan did, so I was on dog patrol, people came up to visit, then I worked one day at the jobette – where I had a feeling of doom all day – and now I’m in San Francisco for some meetings.

It all seems really weird.

Despite all the weirdness (and all the nightmares I had last night), it was a lovely drive. The sun was shining and it was like driving through a big postcard or a Visit California ad. Turning the other way on the highway (instead of the way that leads to the Big Town), I drove past the ocean, then down some hairpin turns to the river, which regularly overflows in the winter and traps Hootervillians and their visitors when the road is closed.

Then it’s through dappled sunlight and groves of ancient redwood trees that almost blot out the sky. There is something really special about being in the midst of these great trees. I can’t quite put my finger on it, but it has elements of spirituality, eeriness, serenity, and the feeling that they have been here for centuries and will be here long after you’re gone.

Next up is the beautiful Anderson Valley: 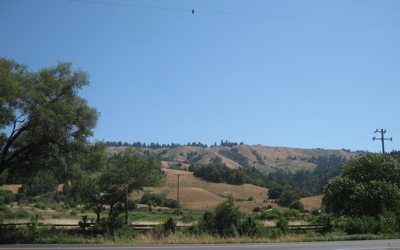 Bedecked by vineyards and apple orchards: 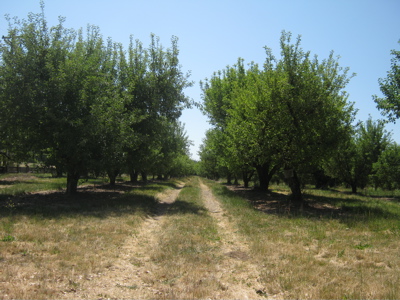 This is where it was time to put on the A/C.

The Valley gives way to rich farmland, dotted with peaceful cows and glossy horses, the trees still that fresh, translucent green of spring, the rolling hills still verdant from the winter rains, but with hints of the “golden” summer to come. The live oaks make deep pools of shade for the farm animals.

Of course, I had to stop for lunch at the Hamburger Ranch and BBQ in Cloverdale: 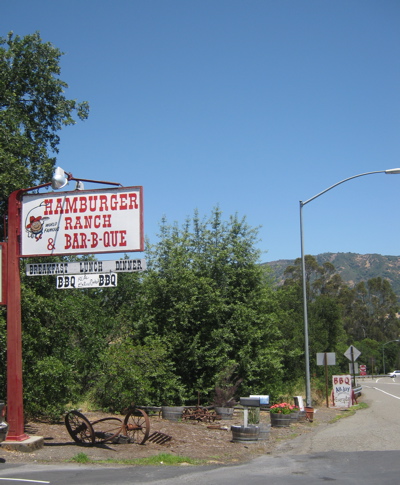 Past San Quentin* and the Marin Civic Center, Frank Lloyd Wright’s last commission, and you’re almost there. From the Waldo Grade, I could see that the Bridge was lightly accented with fog, so it was time to turn off the A/C and open the windows. Crossing the Bridge, which had just turned 75 to much fanfare just three days earlier, the fog blew mistily over the towers as if in a movie. There was still lots of sun to highlight the International Orange always worn by the grand old lady of San Francisco – she didn’t need Sephora to tell her it was the Color of the Year.

Now I’m at my home away from home, the modest motel about four blocks from my former home and four hours from my current one. I called Megan when I got here, but just got her voicemail, so I have no real update for you on Rob’s Mother.

She is in hospice care, and the doctors withdrew everything but painkillers several days ago, so it’s surprising that she still (as far as I know) is with us, though not conscious. I have to admit that it makes me sad that Rob went through all that hell to get to her side as quickly as humanly possible and he never got to talk to her or hear her say a word. I hope that people are right when they say that his Mother was aware of her children’s presence, and I further hope that she is in no pain and will pass peacefully.

Rob is flying back tonight, from Ottawa to Philadelphia and then Philadelphia to SFO. As I write, he must be in the air. He will arrive at the San Francisco airport at about midnight and take a cab for our friend Clayton’s house in the Haight. Tomorrow he’ll take a two hour bus ride to Santa Rosa and Megan will pick him up there, and together they will make the two and a half hour drive to Hooterville.

It makes me tired just thinking about it.

I realize that Rob and I will be in San Francisco at the same time, but we won’t see each other.

Everything really is weird.

*Megan used to teach some preschoolers whose classroom had a distant view of San Quentin. They thought it was a castle, and Megan never disillusioned them. Discuss: why does California persist in allocating prime Bay front real estate to prisons (Alcatraz and Quentin)?

2 thoughts on “A Change of Pace”