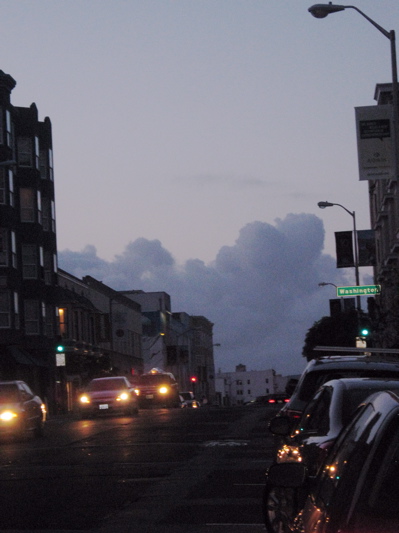 Well, here I am, ending my trip as I started it, with a pre-dawn conference call. I’m drinking reheated coffee from the French bakery, which I bought just for this purpose, figuring that it would be better than the dreaded in-room coffee. So far, I’m right, though I managed to incur a small, cigarette-type burn on the lower part of the cup while yet leaving the coffee tepid.

I think you need coffee before you make it. Or re-heat it.

Yesterday was mostly a blur of meetings, though I made time at the end of it to meander aimlessly around boutiques in my old ‘hood, buy a birthday card for Megan, and get my nails done at the cheap and cheerful nail salon. I was surprised on this occasion that there were two men there, and they could not have been more different. One was the metrosexual poster child, who also got his eyebrows waxed (clearly copying Me), and the other was the rare to near extinction Gentleman, who wore a hat and carried a cane and not a single white hair was out of place.

In the evening, I gorged on delivery Thai food and hockey playoffs, which are getting unprecedented coverage on TV this year. I checked in with Megan, who told me that the kitties were fine, and that there had been a thunderstorm, garnished with lightning and hail. A couple of hours later, the storm showed up to my party. The thunder was so loud that it kept setting off car alarms. It’s a lot easier to hide from the storm in the modest motel than in the fishbowl of my hippie hovel.

[Update: It wasn’t just my imagination: it was a hell of a storm. 750 lightning strikes in four hours, and nearly an inch and a half of rain. It’s sunny now, though – hopefully a good omen for the Giants home opener on Friday the 13th.]

The real dilemma for today is what to do after the early morning call. There are three or four hours to kill before museums and Victor’s opens. What’s a girl to do? Stay tuned…