It seems kind of unfair that you don’t get Easter baskets as a grown-up, which is when you need it most. I’d love to wake up to a basket full of chocolates and cuteness and then test my ability to eat the chocolate before noon. You can skip the marshmallow Peeps and substitute a mimosa. Dinner would be optional.

Instead of eating candy all day, I messed around in the garden a bit before the rain, which is promised to visit us all week, began. I snipped the dead and rangy looking stragglers off the hanging plants, and gave them fertilizer, discovering that the bag of fertilizer mysteriously has a hole placed (in)conveniently near the bottom of the bag.

I finally re-potted the calla lilies Jim gave me (mumble) weeks ago. One of them is looking a little peaked, and I wonder if it was damaged in the hailstorm we had a week or two ago. I propped it up and am hoping for the best: 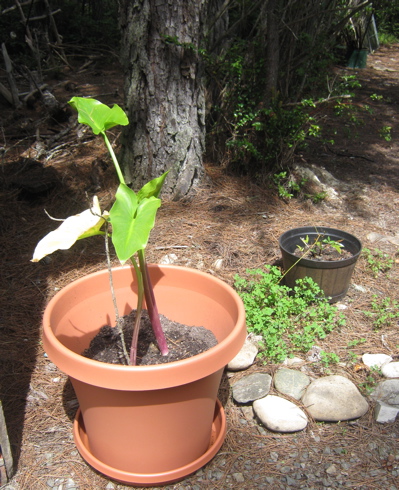 Speaking of damage: the flower spike on one of my orchids got broken off somehow. I was surprisingly upset to find it lying on the gravel this morning. I put it in water, but I’m pretty sure it will never bloom. After all that work of bringing them inside to keep them from getting frost-bitten, and out again to catch the rain…

Despite this setback, I planted some nasturtium seeds. I have never grown anything from a seed, so we’ll see how that works out. The concept I had for them – they are vine-y ones, and my idea was to put the planter on top of the window Mark made in the studio, so they’d tumble brightly down the side – may or may not work out. A strong wind might blow the planter off the window, and then there’s watering something that’s a few feet above my head: 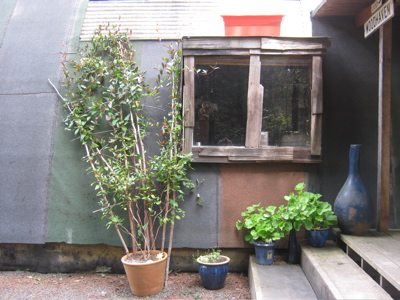 Practicality is not one of my strong suits.

Rob brought by a planter which looks to my untrained eye to be made of felt: 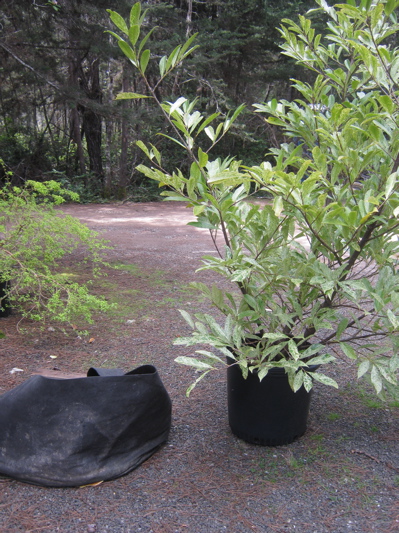 It had a tree in it before, which is now over on the family property, and he thought it would make a good home for the tree by the propane tank which keeps getting knocked over by the wind. During the last storm, I just let it lie there sadly for days at a time, knowing that if I picked it up, it would just get knocked down again, a sort of anti-Weeble. So I’m hoping that the new container will be heavy enough with dirt to keep it an upstanding citizen.