We had a brief break from the seemingly endless rain today (though it’s supposed to make a return engagement for another week starting tomorrow. It’s like Barbra Streisand’s farewell concert), so I emptied out the rain gauge (two and a half inches) and took a look around the rain-swept garden.

Come and look at what I found:

The tulips are blooming, just a couple of days after the vernal equinox. I think they look like they are singing: 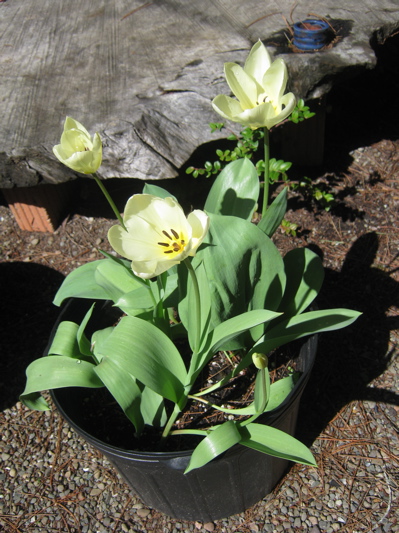 A plant I bought last year because it had really cool silvery-green foliage, like olive trees, has burst into vivid blue flowers. I had no idea it even flowered. But flower it does: 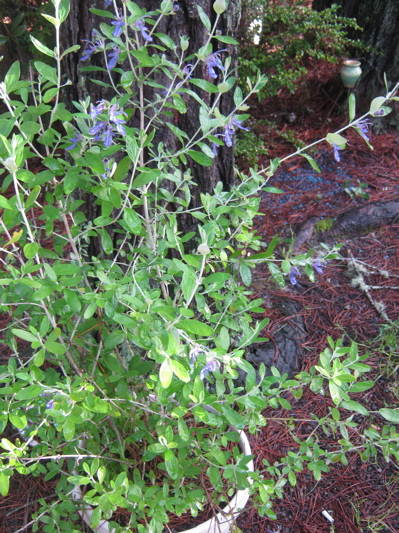 Right behind the mystery flowering plant were volunteer white daffodils, lurking under the huckleberry bushes and pine trees. I wasted no time in getting the trowel, digging them up, and transplanting them to the slow-growing jasmine* which will eventually, one day, cover the lattice and shield my delicate eyes from the sight of the garbage and recycling bins: 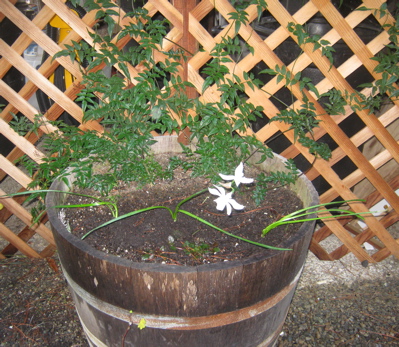 They look nice, no?

Clyde supervised me, much as he supervised Rob’s cement repair. In order to get the best view, he hopped on top of the decaying chimera: 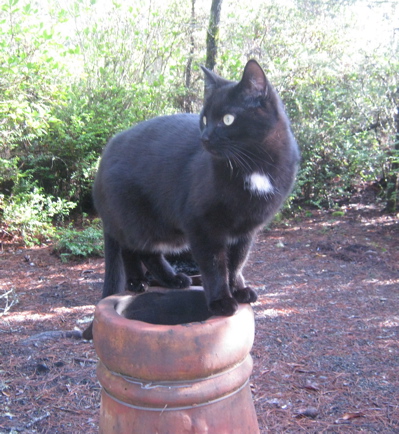 Then he got all crazy and chased his brother Roscoe off into the woods.

Speaking of Roscoe: this morning, he emerged from underneath the couch with a mouse in his mouth. I opened the door for him to go outside and got back to work (today was Spend the Day in Your PJs Day, a step further than Casual Friday, though I was the only one who got the memo). After a while, it occurred to me that my transformation from City Glamazon to Country Bumpkin is now complete. I can’t hear on a cell phone in the city; the last time I put my hand on a spider in the shower I apologized to Charlotte’s cousin without a shudder; and the sight of my cat with a mouse in his mouth didn’t make me scream or shriek. Or even think about it.

I hope overalls aren’t next.

*Perversely, the purple honeysuckle on the side of the house and the potato vine beside the shed are total overachievers, when they aren’t supposed to hide anything. Maybe my expectations of the jasmine are too high. Or too fast.

2 comments on “Springing Ahead”