Being swamped with work from both the Job and the Jobette has made me too sleep and time deprived lately to give you the lowdown on what’s been happening around here. Amazingly, things other than work and more work have occurred. Such as…

My neighbor Jim stopped by, bearing gifts. This is my very favorite kind of visit. We have been Facebook friends and email buddies for years, and he reads my blog (as all fabulous people do), as well as actual neighbors – he lives about three miles away from me – yet we had never met before in real life.

So it was definitely about time.

Jim arrived bearing a couple of calla lilies to add to the garden: 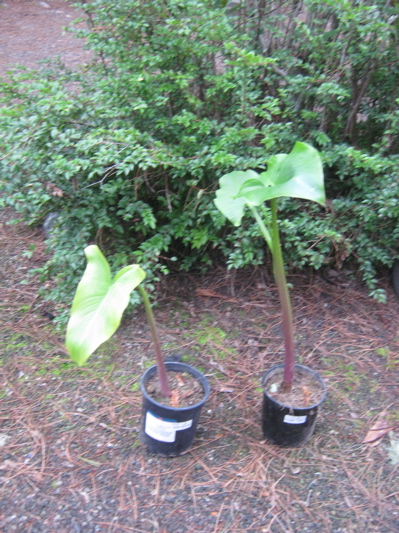 I will have to re-pot them, but apparently, they grow like weeds. I’m looking forward to their first elegant blooms.

He also brought me a fabulous outdoor candelabra, which might need a cup of Rob to repair it a bit, but it’s certainly a worthy addition to my ever-growing outdoor lighting collection: 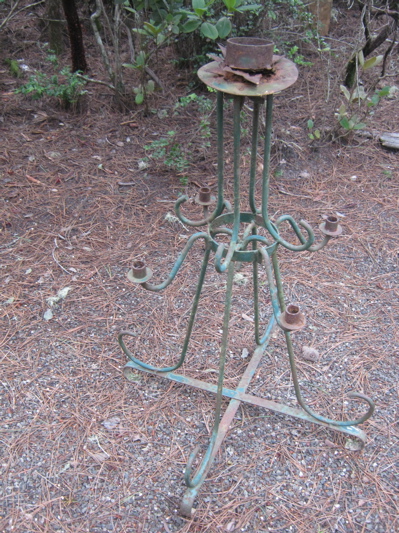 I had a great time hanging out with Jim and I hope we get to spend more time together soon.

Megan woke up one day to find several thousands of dollars in her bank account. This what you call a nice surprise. I have heard of them, but seldom, if ever, experienced one in real life.

It was most of the back payments for Rob’s permanent disability. Apparently they give you some of it (after neatly removing the lawyer’s fees off the top) and then give you more six months later, for some reason. But what’s six months when you’ve already had to wait four years?

Now there are decisions and purchases to be made, notably a car for Megan, so we can stop sharing, and some kind of shelter for her and Rob on the family property, so they can stop paying for two places.

It’s happy and exciting news, but I haven’t found time to celebrate with her yet. One of these days…

The splendid pool closed last month. They ran out of money to operate it, despite cranking the water temperature down to 77 (from 85), and I sure felt every single one of those degrees. They also saw fit to keep the exercise rooms open while keeping the locker rooms closed. So – you could go to Zumba or spinning class, but you couldn’t shower afterwards. So that’s out. Basically I am exercise-free until I a) find some time; and 2) find somewhere to do it and get cleaned up afterwards.

On the bright side, Measure A passed last week. It ups the sales tax by half a penny, and apparently the half pennies will add up enough to reopen the wonderful pool and keep it open forever. At least, that’s the story. However, it will take until at least July for enough pennies to accumulate to reopen the pool, so it’s kind of a good news/bad news scenario. I will definitely have to come up with a Plan B if I ever find the time.

The hospital where Megan works is also having financial difficulties. Like pretty much every other company or corporation in America, it’s the worker bees who have to bear the brunt of it. At first, they actually considered closing the Emergency Room at night – yes, the dark hours when babies are born and car accidents and heart attacks tend to happen – but they soon realized the error of their ways.

Unfortunately, their Plan B is for Megan to work three 10 hour shifts one week, and four 10 hour shifts the next, instead of three 12 hour shifts in a row. So it’s more inconvenient; for several hours she will be the only person to answer phones and admit patients and deal with paperwork and transfers. Oh, and she gets less money because she’s not working 12 hour shifts. Pretty much a lose/lose.

On the other hand…we are lucky that we are employed at all in this day and age. As my boss says, this is the new normal.

3 comments on “Catching Up”