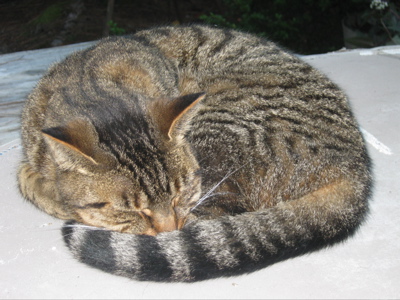 Really, is there anything cozier-looking than a sleeping cat?

Even if they are responsible for The Plague.

Last month, I noticed that Audrey was scratching a lot. I also noticed that my legs, never my best feature, looked as if I were experiencing a third round of chicken pox*, itchiness and all.

Then I took the bed apart, washed everything that could be washed, and hung it out in the clean sunshine to try while I sprayed the bed, featherbed, and carpets with some stuff that is supposed to kill fleas and keep them that way for 140 days.

Problem solved, I thought. But, as usual, I was wrong. Besides being death-defying, these fleas seemed to be some kind of mutants, equipped with Super Itch**. Even after I scratched the bites until they bled, they still itched. They still itched when scabbed over. I had bruises from the scratching. Audrey was super scabby under her soft fur. The boys: nothing.

One evening, I actually saw a flea on the bed. I crushed it, and ordered more disAdvantage on line. Exactly a month after the first application, I gooed everyone again, hoping for the best. So far, so good. Let’s hope that the fleas are gone for the rest of the year. Pretty soon I’ll need to spend my flea allowance on propane.

*I got it when I was nine and again when I was 15. I got out of mid-terms the second time. Woohoo!

**One of life’s enduring mysteries is why anything that drinks our blood leaves an itch behind. They’d be welcome to the blood if they were itchless. Definitely a design flaw.

3 thoughts on “The Plague”