The thing about having unplanted plants on your hands is that you have to plant them. Sooner is better than later. But since the soil around my house is hard and unforgiving, dirt had to be imported. Also, it occurred to me that I might want to bring the twin palms with me if I ever move. And since half wine casks were on sale for about $20 apiece, it seemed like a good idea to invest.

The long-suffering Rob took the money and ran – well, drove carefully – to the Big Town and came back with the back of his truck full of dirt and wine casks (which helped to hold down the tarp and keep my investment from flying away down the highway).

All I had to do was shovel the dirt and roll the wine casks around. He even drilled holes in the bottom for drainage.

After rolling one of the palms around on a dolly I borrowed from Mark (who is doing fine so far), I decided to put one near the daisy tree in the middle of the yard: 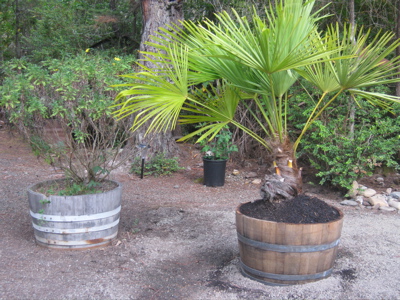 At the time, I didn’t realize that this involves borrowing a heavy iron pointed thing, like some kind of medieval weapon, and piercing the root ball of the bush repeatedly before yanking it out of the ground, which led to borrowing gravel from Mark. But it also led to Mark filling in the trench in front of my house from the great water project last year, thus avoiding a Calamity Suzy incident. You will be pleased to hear that I removed the berries from the bush before uprooting it (though this led to further berry picking, temporarily diverting me from the palm tree planting at hand).

So, yeah: the huckleberry bush was out, the dirt was smoothed over with gravel, and I was ready to place the palm: 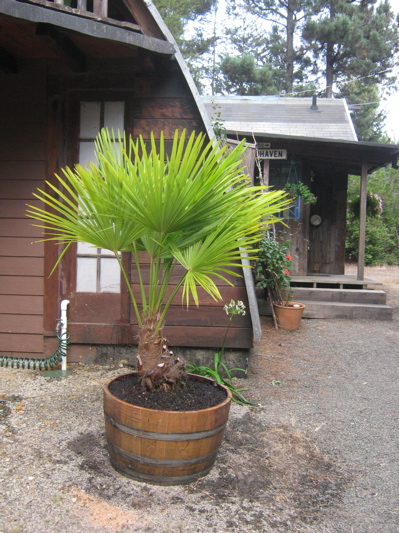 I think it makes a nice entranceway to the house: 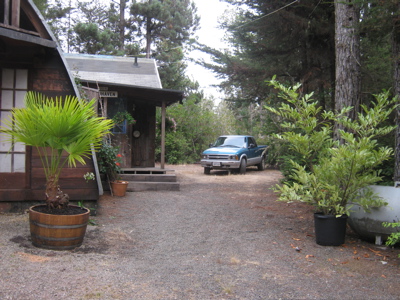 I hope the twin palms are happy in their new home. As for the bamboo, I have placed it at the corner of the house, right outside the shower window: 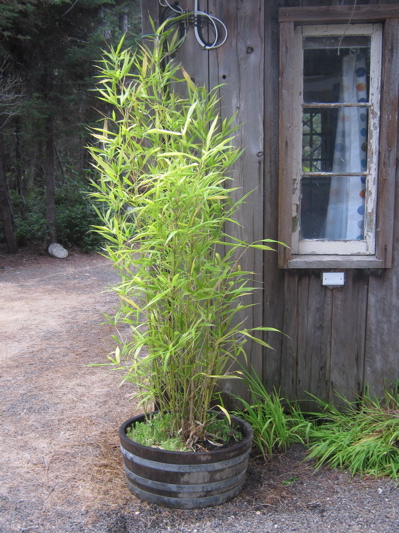 I’m hoping it will grow a bit more and give me a tropical oasis feeling while I’m in the shower. At least I can see the palm from there. I have to say, it’s quite exciting, being the proud owner of not one, but two palm trees.