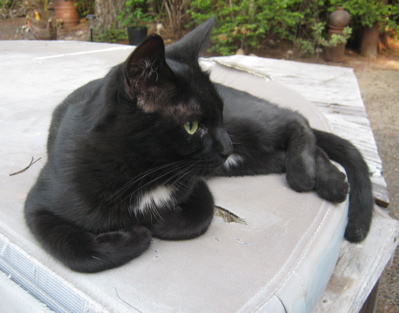 On Saturday night, I was watching “The Hoodlum” (with Lawrence Tierney, on a brief hiatus from jail, and his real-life brother, Edward) with Clyde cuddled up to me. Clyde’s cuddling style is to stare at me, then jump on my lap, climb up my body, and collapse with his head on my shoulder, giving a big sigh before starting to purr.

Both he and Roscoe like to be rubbed under their chin. But this time, something was wrong. There was a huge bump. I felt the other side of his chin. Bump-free. Uh oh. However, it didn’t seem to hurt him and he was acting normally.

In the morning, Megan investigated and said it was an abscess. By then, Clyde had scratched at it and it was wet and much ickier-looking. Being the excellent sister she is, she also called Dr. Karen on the dot of 9:00 on Monday morning, when I was arriving at the jobette. She not only got him an appointment at 11:00, but also caught him and took him there.

I am proud to say that by all accounts, my brave little Clyde did not complain or fuss while having his chin shaved and getting an antibiotic shot. Dr. Karen was impressed with his courage and cuteness. Apparently both were remarked on often. My little guy weighs 8.7 pounds!

I am supposed to keep him in today as well as yesterday. When I came home yesterday, Clyde was sleeping on the bathmat and Audrey was sleeping nearby on a (white) towel she had pulled off the holder just for this purpose. Roscoe, of course, was nowhere to be seen.

The house was like an oven, since all the doors were closed except the sliding glass ones in the living room. Rob installed a found screen in that one last summer, so that was open. I had to put the fan on in the sleeping loft, which becomes unbearable if it’s over 60 degrees outside and the balcony door isn’t open. Naturally this is the warmest part of the year, and it was the warmest day we’ve had in a while.

Clyde was pretty sleepy all evening. Today he seems like his old self and I’m not sure if I can make him stay in all day on such a lovely, sunny day. Stay tuned!