Audrey’s busy being Audrey these days. Staying out all night and wandering back in when I get up at 6:30. Or not.

When she’s in, she’s either demanding canned food or insisting on sitting on my lap and licking me until she’s bored and leaves, or goes to sleep, whatever comes first.

I think her weight is just about right, though on the occasions when I pick her up (to her eternal annoyance), she still feels light as a feather. I think I’ve created a kind of monster by trying to feed her up over the summer. Now she expects the disgusting canned food twice a day, and makes a big fuss about getting it. 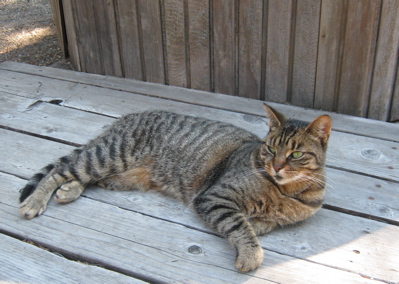 Oddly, the boys don’t try to eat it, though they do inspect the dish after Audrey has finished and stalked off. They seem to think that there are different rules for Audrey (staying out later; sitting on the table) than for them (not) and they don’t seem to mind at all.

Clyde’s chin is healing up. Megan inspected it yesterday and said it looked pretty good, as such things go. I have to admit that I’m a little concerned it will get re-infected and require another trip to the vet, but hopefully it won’t. Apparently it will take a while to heal. It was likely caused by a cat bite, and I wonder if it was from playing with Roscoe or from fighting with a neighbor.