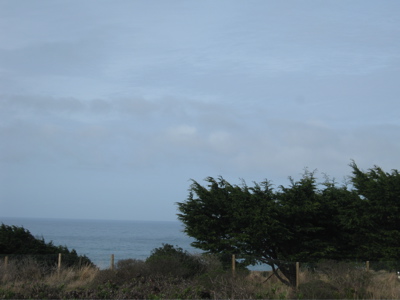 Last night, I happened to be channel-surfing and came across the shocking footage of the Japanese earthquake. Any Californian feels a certain kinship with fellow earthquake sufferers, and I was appalled by the size of the disaster: 8.9 on the Richter scale. To put it in perspective, the 1989 Loma Prieta quake was a 6.9, and the 1906 “Great” quake, which devastated most of the city, was about an 8. Keep in mind that a quake measuring 9.0 is 10 times greater than one measuring 8.0. This is one of the five strongest quakes in recorded history.

This morning, I woke up to an announcement in my email* saying that the one and only road to San Francisco was closed, as were several state parks (including the beach I pass on my way to work and back) and schools. I quickly called Megan, since she and Rob were planning to go to San Francisco this morning to consult with some specialists about Rob’s continuing spinal issues (yes, there is more surgery in his future). Fortunately, they hadn’t left yet, though they wouldn’t have gotten far.

They rescheduled the appointment, and we all headed down to the local store, partly to get propane and partly to find out what was going on and have a peek at the ocean. The ocean, as you see above, was living up to its name and was actually calmer than it was yesterday. The local fire department and emergency services were on alert, though nothing had happened yet. This afternoon, I got another email alert saying that there had been serious destruction caused by the tsunami in the harbor in the big town. The very harbor where we have our few but fabulous girls’ nights out.

As I write, Dad’s famous honey mustard chicken is slowly cooking in my little oven, filling the house with a delicious, comforting scent. Pretty soon I’ll start the brown rice and later I’ll steam some broccoli. Megan and Rob are coming over for dinner tonight. Maybe there’s something about a disaster that makes you want to keep your loved ones close. I feel lucky that we are all safe, but my heart aches for the people of Japan. Our thoughts are with them.

*I recently joined a local Listserv for announcements, and it’s been quite useful so far. Weather warnings, an armed fugitive in the village (he was caught)…things like that. News you can use!