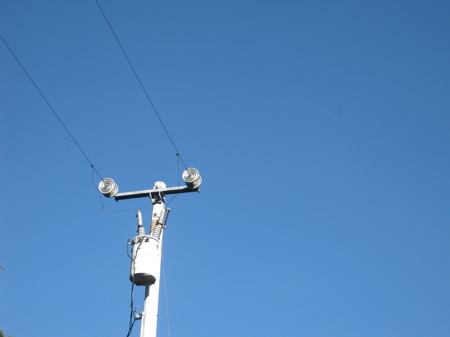 You may remember that the landline phone quit suddenly, walking out on me with no explanation or apology. In keeping with this theme, AT&T did not show up to fix it on the appointed date. Despite the fact that they presumably do know how to use a phone, they didn’t call me. After being on hold for 45 minutes, I hung up in frustration.

I called them the next day and canceled the service.

After a couple of weeks, it became clear that cell phone only was not going to work for me. My phone is from one area code and living in another, and no amount of *228 is going to stop it from constantly searching for service, which means that the battery gets tired faster than a 100 year old running a marathon in mid-summer heat.

Cell phone service here is spotty at best, and there are various parts of the house which get no service, a definite drawback for a habitual pacer like Self. And there is essentially no service between Casa di Kitties and the village, several miles away.

And don’t get me started on the difficulties of being on a conference call on a cell phone. The sound is terrible, and it’s really hard for me to take notes while holding the phone with one hand. If use the headset I used to use on the landline, the sound is exponentially worse.

So, to my chagrin, I called AT&T back and asked them to restore the service. Unsurprisingly, my number hadn’t been taken, so I could get the old number back. Unsurprisingly, the repairman did not appear on the scheduled date. Another frustrating call and more than a month after the original problem reared its ugly head, and the repairman arrived! Two hours early!

He fixed it right up, telling me that the phone box is actually located several miles away and it was the longest connection he had ever seen. He was really nice, and I felt sorry that he had to drive all the way here from Santa Rosa, but I’m glad that I’m communicado again.