Before we get back to our regularly scheduled post, I just have to say (well, shout):

WE ARE THE CHAMPIONS!

Yes, for the first time in 56 years, the San Francisco Giants are World Series Champions!

I still can’t quite believe it. Wow.

I followed the game’s finale with the final two episodes of this season’s “Mad Men”, and without giving away the plot, I’ll just say that I found the ending unconvincing and weird. Also that it was the bleakest season yet. Can’t wait for next season, though. Same goes for the Giants.

And now back to Halloween… 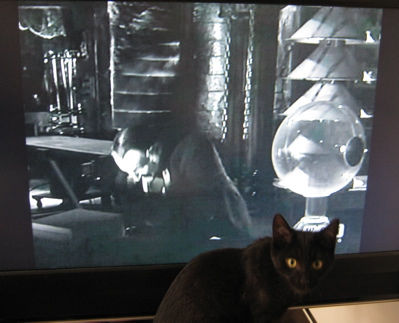 Roscoe gets in the Halloween spirit

On Halloween morning, I introduced Jessica and the kittens to “The Munsters”. Jessica was immediately captivated, especially by Lily*, seeing through the make-up and finding her beautiful. She also liked Lily’s signature bat necklace, saying “And it’s bling, which we love.”

Megan came by to pick us up, and we started our grand Halloween tour in town, where there was a party at a pet food emporium. We met up with Lu and Harlow: 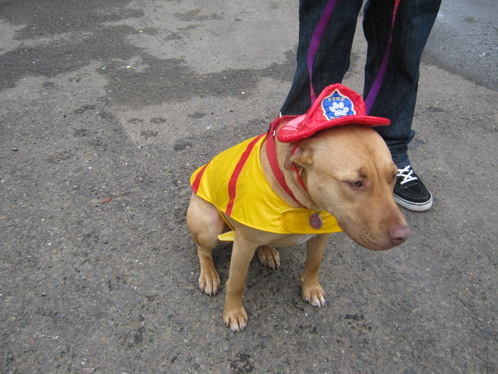 You can see that Harlow is much bigger than last year.

In addition to bobbing for hot dogs for the dogs, gift bags for all, raffles, and games, there was face painting. Jessica got in the Halloween spirit with a spider: 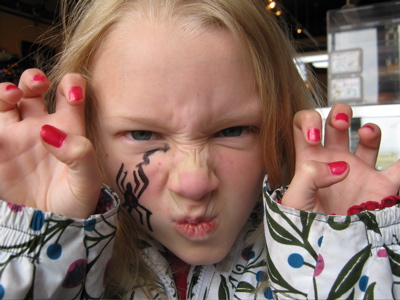 Then we stopped in at the Town Hall to see the Day of the Dead exhibits. It was so wonderful that it deserves its own post.

Finally, we all repaired to Lu’s house so Jessica could get ready. I was charged with putting make-up on around the spider. The white make-up supposedly glowed in the dark, but it didn’t seem to when the time came. It was kind of a challenge blending the white with the green and the spider. Also, Jessica’s skin is so fair it’s almost translucent, and utterly smooth and flawless.

She wouldn’t let me give her witchy eyebrows, so I just darkened hers: 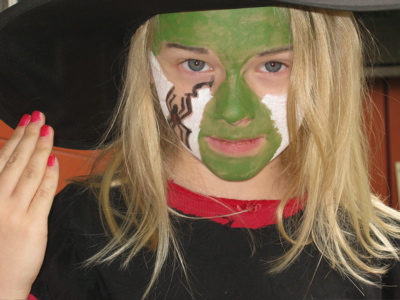 It’s hard to tell from the picture, but there are glow sticks around her wrist and ankle. Needless to say, her mother made the dress: 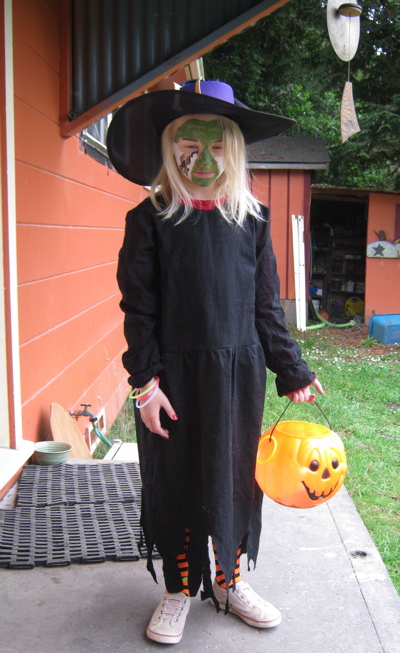 I have to admit I was a little surprised that Jessica didn’t want to be something more unusual. But she looked adorable.

In the village, Dr. Karen’s office was open and decorated to the nines (or thirteens). She was dressed as a mad scientist and dispensed treats for dogs, cats, and kids as well as grown-ups, in the form of free wine. We went on to the street fair, where the Flynn Creek Circus performed: 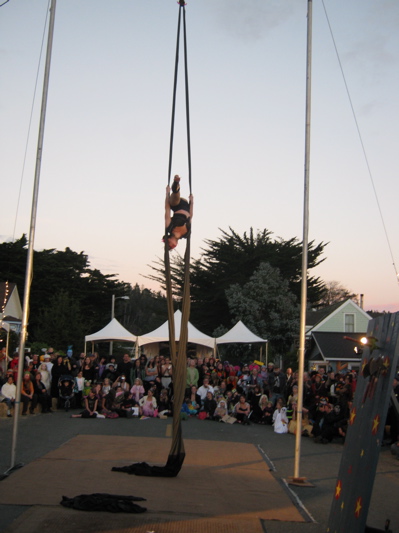 You can see that the weather had finally cleared up after trick or treating us with ten inches of early rain. As the evening went on, the stars were out in full force, as if they had missed us.

Despite the starlight, trick or treating in the dark was tricky for Self, though Megan and Jessica had no problem bouncing along the village streets. I lagged behind, convinced that I’d trip over something or fall into a hole, but I managed to survive this particular Halloween unscathed, unlike last year.

We ended up at the historic Crown Hall, where there was a costume judging contest for the kids. I can’t begin to describe the racket in that place. Not for the first time, I marveled at parents and their patience, and wondered how my own put up with so many kids and so many Halloweens, so long ago.

*Played by the lovely Yvonne De Carlo. She was the secret Canadian in the show. You’ll find one in every TV show. You’ll see.