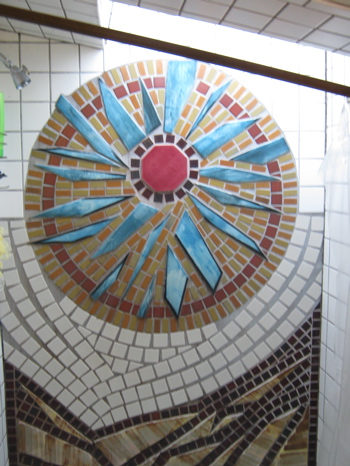 For those of you who have been waiting to see James’ tile work in Megan and Rob’s bathroom, here you go! I think it’s really pretty. And like I said, if there’s anything suggestive there, it’s pretty subliminal. It looks like a flower to me.

You will all be happy to hear that Rob and Jonathan worked their usual magic and got Megan’s car working yesterday morning, long before she needed it for her final night shift of the week. It’s hardly surprising that the poor old thing needs repairs lately – there’s over 200,000 miles on it. And those aren’t nice, easy city miles, either.

Yesterday was a pretty exciting day. It kicked off with Roscoe showing up with a dead mouse. Audrey decided to one-up him and show him who’s really boss by showing up with a giant bird in her mouth. Even though it was in the 80s yesterday, I kept the doors shut until the cats stopped playing with their prey. My stepmother always used to say, “Nature is red in tooth and claw”, but that doesn’t mean I want it in my house.

Erica dropped by, after looking at a disappointing house near the school. The landlord wanted a lot of rent, and there was no outside space for Jessica to play in. This seemed incredible to me, considering we are in the depths of the country. So it was a no go. I realize that I was really lucky to get this place, despite all its quirks, since there are hardly any places to rent and what is available is expensive. I hope she finds something soon.

The thermal underwear Megan and I ordered for Rob’s birthday arrived belatedly. Of course, it arrived when we’ve been having a string of 85 degree days. But I’m sure he’ll be glad to have it when the storms of winter arrive in a month or two.

Also in advance of winter chill, a propane heater I bought on eBay arrived (it’s difficult-to-impossible to find propane heaters for sale in California). It’s slated to go in the unheated, uninsulated studio, in the hopes of making it slightly more usable and habitable in the six months (or more) we have of winter. The boys will of course have to install it, though hopefully we’ll have some time before it gets really cold. These days, it’s hard to believe that it will ever be dark and rainy.

Finally, the new carpet for the sleeping loft arrived! Yay! I can’t wait for Mark to replace the old, stained one, even though it means moving all the furniture out onto the balcony. The carpet was delivered by the fabulous Monica’s sweet husband, Joe, and now it’s in the still unheated studio, waiting for me to trip over it in Calamity Suzy style. Stay tuned!