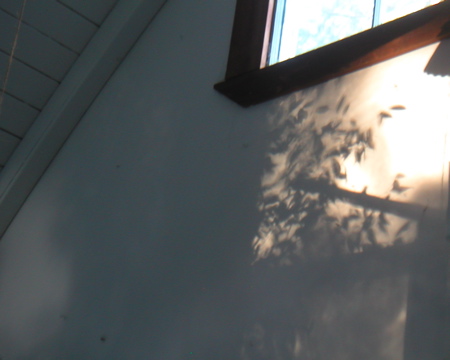 Wondering where I’ve been?

As you could probably tell from the tone of my last post, I was worried about her right away. When she wasn’t there in the morning, and didn’t come in for breakfast, a little seed of panic bloomed in my heart.

I’ve spent hours scouring the property from one end to the other, peering inside abandoned trailers, cars, boats, strange shackoid structures and the like. It was like an Awful Warning about hoarding. You would simply not believe the amount of decaying things and stuff semi-hidden in these bucolic woods. Most of the trailers and structures were open in one way or another, so she isn’t trapped in any of them. I figure anything I had trouble wrenching open was outside the possibility of someone without opposable thumbs, but I wrenched away anyway.

I looked up and down the logging road behind the house, on the lookout for signs of mountain lions and bobcats, or even, God help me, circling crows and vultures. At the end of the logging road, I walked down the Ridge, spying an abandoned Werther’s Original package in the ditch, which made me wonder if my mother was trying to tell me something. During her final illness, she ate bagfuls of them, always crinkling the wrappers or crunching them furtively. After she died, we found a huge stash of them. It kind of traumatizes me every time I see a bag of them.

I turned onto our driveway and after searching the structures there, stopped at the front house. I got to meet my new neighbor, a nice woman named Laurie who has a cute little Yorkie named Louie. She hadn’t seen June, and Louie would have barked if she had ventured up there, but Laurie said she’d keep an eye out for me.

Other than bothering Laurie, I repeated this procedure repeatedly all week, with the same results.

I made a flyer, and Rob put it up at the store and the post office. I figure everyone in Hooterville goes to one or the other sooner or later. Megan and I put flyers in our neighbors’ mailboxes and on utility poles. So every time I drive down the Ridge or check the mail or go to the store, I’m faced with them. I’m hoping that someone found her and took her in, since she doesn’t have a collar (too dangerous in the woods).

Finally, I took the flyers to the humane society and animal care and control, and checked the rescued cats. I knew she wasn’t there, but it had to be done. It was the worst of all, since it pretty much removed my last tattered shred of hope.

People keep telling me that she’s off on an adventure, but they don’t know June. She is a real homebody, who slept with me every single night, had a nap on the bed every afternoon, came when she was called (unusual for a cat, but she is an unusual cat), and was almost always visible around the house when she was outside. Megan, Mark and Laurie all say that they have never seen her at their houses, so she never went far. Audrey is the adventurous one, not June.