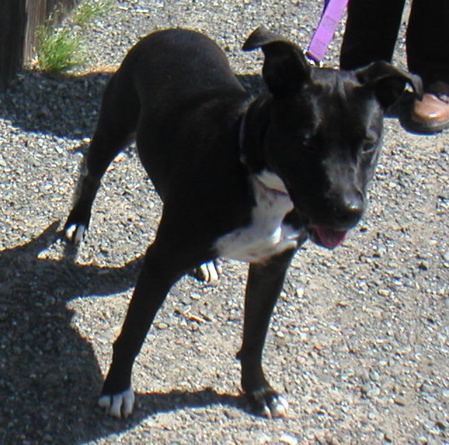 The Star of the show

It was a beautiful, sunny day as Megan and I set off on our long journey.

First we drove to town, and then took Highway 20 for what seemed like the rest of our lives. For those of you who have never had the pleasure, it’s a road as curvacious as Jayne Mansfield, with the highs and lows of Judy Garland. You can’t drive fast on a road like that. It crests at 3,000 feet, which is why it can get snow and black ice during the winter. The view from the top is quite spectacular, though.

The road winds through farmland, with sheep and cows dotting the steep hills. There are groves of almond trees with wildflowers carpeting the grass so it looks like drifts of snow. Fields of mustard blaze beside snow-capped mountains, tended by weary migrant workers. Orange poppies and blue lupines grow wild by the side of the road. 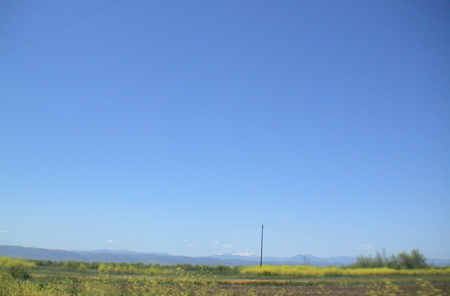 We passed through several little towns on the shore of Clear Lake, which is the oldest lake in the entire US of A. Mount Kenocti, an extinct (let’s hope!) volcano presides over its 100 mile shoreline: 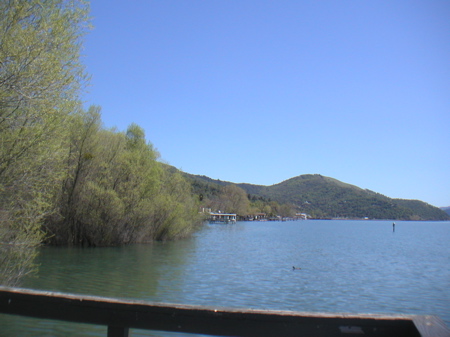 My favorite town was Lucerne. I’d love to rent one of the little old fashioned cottages on the lake for a weekend. 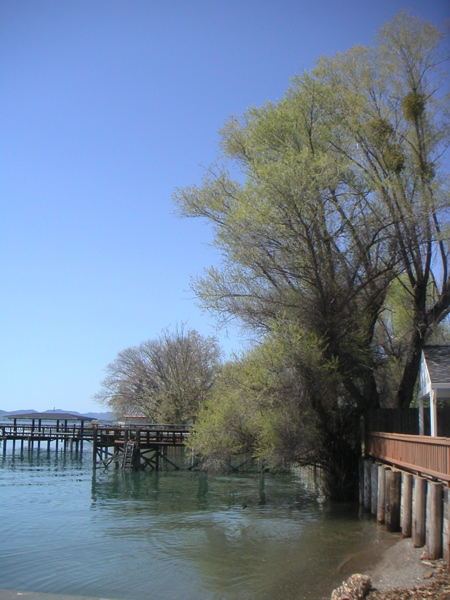 We were trapped behind a truck for 50 miles or so. It was amazing to me that a professional driver wouldn’t pull over for a caravan of cars behind him, considering there were multiple signs saying that slower traffic must pull over and plenty of pullouts for him to use. He was just a jackass. When we finally reached a place we could pass him, I flipped him off as we zoomed past. I know you think of me as a refined, gently-bred lady, but it had to be done. It was that, or a drive-by shooting.

Needless to say, this made us late for meeting Ray, and in the usual way of local highways (two lane roads) around here, there was no cell service, so we couldn’t call him. When we finally got to Colusa, it was about noon, and we had left the house at 8:30.

Colusa is a lovely town, settled in 1850, with charming Victorian houses, tree-lined streets, a historic courthouse (built in 1861 and the oldest remaining in the Sacramento Valley), a Carnegie Library dating to 1905, and cute shops. It has a very southern feel to it, and I would like to have explored it more.

We met up with Ray outside the cafe. He was quite the character: enormous, with a ZZ Top beard and long grey hair straggling from the lower half of his bald head. He had two tiny brown teeth left, one up and one down, and it was hard for this refined, gently-bred lady not to stare. Shaving was very optional for him. Hygiene….not his forte. He managed to extract himself from the car and lumber over to a nearby park with Star.

We had been told that Star was nervous, shy, and afraid of the outside. She happily went with Meg on the leash, bounded all over the grass, and licked our faces. During the walk, it became clear that she has never been trained and has no manners at all. But she’s the total opposite of her description. When the time came, she jumped right into our car and settled down on the blanket.

All was peaceful on the long ride home until we stopped at the lights in Willits. Two boys went by on skateboards, and she went bananas, barking her head off. We hastily closed all the windows, but the kids didn’t seem to notice. Note to self: Star is not a big fan of skateboards. Good thing there are no sidewalks in Hooterville.

Hooterville had never looked so beautiful to either of us as it did that evening. We both sighed with happiness as we crossed the wooden bridge and caught sight of the village. Amazingly, we saw no fewer than eight CHP officers, but didn’t get a ticket. I credit Megan’s incredible ability to spot them, which may be related to her astonishing ability to flag down a cab anywhere, any time.

We reluctantly met Rob and Schatzi at the family property, so the two dogs could meet on neutral territory. It went pretty well, but Schatzi does not enjoy being bounced at or the crazy puppy energy, both of which Star has in spades. We’ll see if it works out for Meg to foster this dog long-term.

We finally got home at 6:30 that evening, 10 hours after we left. That was a lot of driving.

Fortunately, I had made chili the day before and always have Jiffy corn muffin mix on hand. We were exhausted, but it was fun to see a new part of this great state. And I always have fun with my sister.