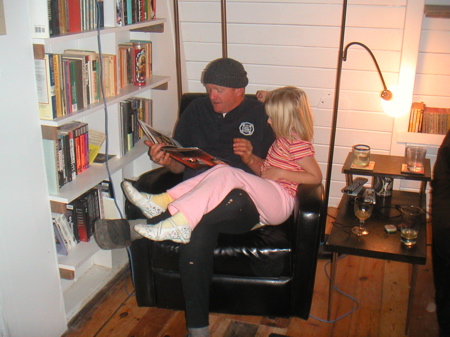 Even though Thanksgiving is not generally considered a gift-giving occasion (to my mind, one of its more delightful aspects), Jonathan couldn’t resist bringing Jessica a book which gives the real dirt on the Three Little Pigs. It’s authored by the Wolf himself, and you can see that it held Jessica spellbound. She wasn’t the only one, either. Jonathan seems to have inherited our father’s gift for reading stories and doing all the voices. It was great.

When the story was over, Jessica went up to bed. She had permission to read as long as she liked on this special occasion, but spotted my jewelry box. Immediate exploration was called for, and here you see Jessica wearing the earrings I wore at my wedding (my dress was a 1940’s emerald green taffeta gown), along with a string of jade beads my Dad brought me from China and a string of rubies from India: 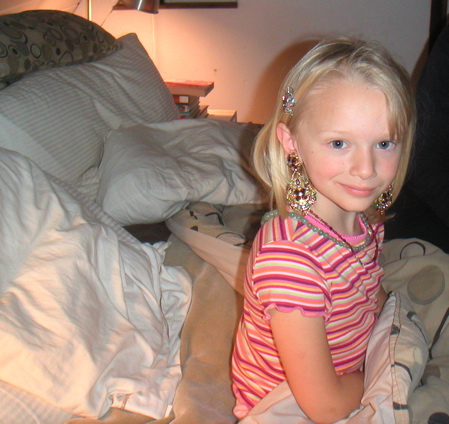 In going through the collection with Jessica, I realized how many beautiful things he had given me over the years on his many travels.

While Jessica was being delighted and I was getting nostalgic, there was channel surfing going on downstairs, and we were alerted to the fact that the Rockettes were on. I dragged Jessica down the stairs as fast as I could, and sat with her on my lap as the Christmas Spectacular unfolded in front of us in all its glory.

During the first number, where the Rockettes were wearing their Candy Cane outfits, she observed, “They look like little Christmas presents.” After a while, she said, “They’re the most beautiful girls in the world!” I was about her age when I became enchanted by the Rockettes and the Weeki Wachee mermaids, and the enchantment has lasted all these years. It was so fun to share it.

The next day, Erica told me that Jessica dressed up in a leotard and danced around the house saying “I’m a Rockette! I’m a Rockette!”