I’ve made some fun discoveries during the un-fun process of unpacking.

I found my grandparents’ wedding announcement (they got married in a field of flowers on a summer day with one attendant each, so Nana’s parents sent out “At Home” announcements after the fact. I wonder if there was a great big noisy fuss over that wedding) and put it aside to show Megan. She was six when they died, and doesn’t really remember them, but she was charmed nonetheless. 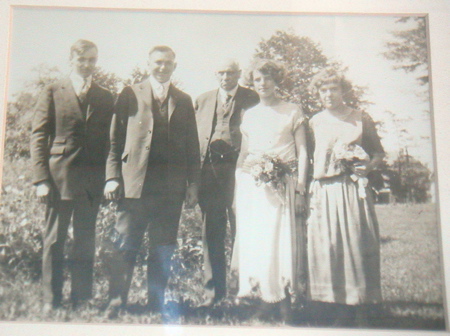 The best man; my obviously overjoyed grandfather; the grumpy minister; my beautiful grandmother in her home-made wedding dress; the maid of honor.

Today I came across a battered old book called Outdoorland which belonged to my father when he was a boy. His name and address are written in fountain pen on the inside cover. His schoolboy hand, to my eye, looks very little like the characteristic script he had later in life. I’m saving this one to show Meg, too. I loved that book when I was a child. 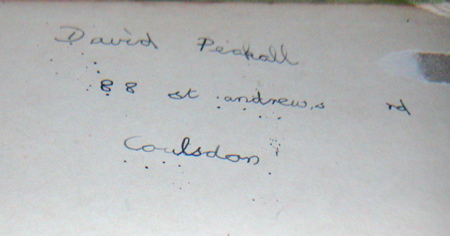 Yesterday, I discovered a Chinese brass box engraved with an elaborate design of dragons and lotus blossoms. I’ve had it since I was twelve years old. 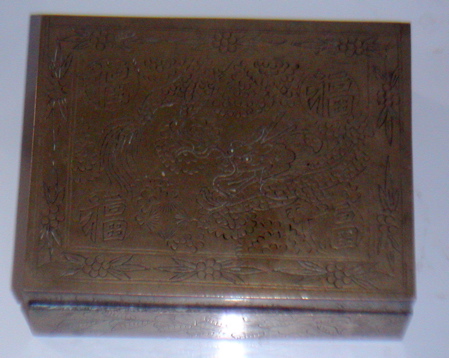 Dad had a lot of fascinating and influential friends, and Dr. Kellogg was one of them. We went to visit him in his grand old house one day, and the brass box caught my eye and my fancy. I admired it and asked if I could pick it up to get a better look. Dr. Kellogg put it in my hands and said it was mine. I looked at him in shock, then looked to Dad as if to say, “What do I do?” Dad told me to thank Dr. Kellogg, and I did. For the rest of the visit, I held the box and made sure not to admire anything else. At least out loud.

I learned later that Dr. Kellogg and his wife had bought the box on a trip to China many years earlier. They used to keep cigarettes in its wood-lined interior. I have miscellaneous foreign money in it now, including Russian, French, and Italian, but what the box really holds is memories.