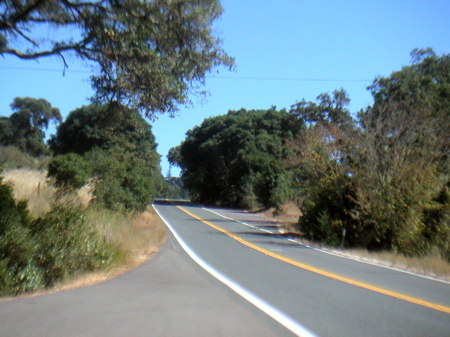 Operation Escape Oakland hit a few snags, as many elaborate maneuvers are wont to do.

Rob is an insulin-dependent diabetic, and had some issues with his sugar count early on Wednesday morning. We applied soda and waited for him to feel better. At times like this, it’s great to have your EMS trained brother at hand.

While Rob was recovering, Audrey decided she’d get a head start and escaped from her carrier. The girls’ carriers are cloth and close with zippers that meet in the middle. Audrey must have poked her nose or paw through the place where the zippers met until she made a big enough hole to slip out.

Unfortunately, I had left the car window open to give the girls some air while we completed the packing process.

Fortunately, Audrey ran into B’s garden, which is enclosed, so trapping her was (relatively) easy.

Unfortunately, I had learned nothing from this experience since Audrey repeated the escape, though this time remaining inside the car (with its windows closed).

Fortunately, my brother had a bit of string in his pocket, as boys often do, and tied the zippers together tightly.

It seems that Audrey does not enjoy driving any more than I do, since she did an encore of the carrier poo. When I finally decanted her, she was literally covered in it. Megan immediately put her in the sink and washed her, which Audrey took remarkably well, after meowing for pretty much the entire four hour drive. June had thrown up in her carrier, undoubtedly due to the proximity of the carrier poo. Henry didn’t utter a peep and all his bodily fluids stayed in his body.

I expected a series of boos, hisses, and claw to claw combat when all three cats met, but so far, so good. They have walked past each other without remark, though fights may still ensue. They do seem happy to be here, and are enjoying the view from the glass doors and exploring a new place. This is definitely a much more interesting house from a cat’s point of view.

As for me, I now have proof positive that housework is very, very bad for you.

After we finished most of the packing on Wednesday, we cleaned the house, which entailed grovelling around on hands and knees. Not for the first time, I reflected that cleaning is a job best left to the professionals. I’m pretty sure that this unnatural activity resulted in my knees going on strike. By the time I caught Audrey the second time, I noticed that the inside side of my knees (if you follow me) hurt. By the time we stopped for gas, I could hardly bend them. By the time we got home, Megan took one look at me and put me on her couch with ice packs and painkillers.

So while my family was unpacking all my things and stuff, I was lying on Megan’s couch watching “Gilmore Girls” and whimpering. The guilt was definitely worse than the pain. I feel better today, but have been ordered to take it easy so that hopefully tomorrow I’ll be able to get a few things done around my new house.

It was an adventure, all right. Would you expect anything less from Calamity Suzy?

2 comments on “The Adventure”