Today I’m coming to you from Moodys, where there is WiFi access in Mendocino. Megan is walking Schatzi on the headlands, so I have a little time today. This is the post I wrote on Tuesday, which got preempted by the quickie house post yesterday. A girl has her priorities.

Rose’s service is at 4:00 today. I’m not sure what to expect, but I’m glad I can be there. I missed James’s when I was at that stupid conference in Florida, so it’s really important to me to be there today.

We never did get to the fair. It was too hot in Boonville that day. Anderson Valley is where you flip on the A/C and leave it on until you reach the Coast (going north) or the Bay (going south). Since my goal was heat avoidance, I decided not to go this year, but there’s always next year. And the year after that…

In keeping with the goal, Meg and I took Schatzi to the beach at Big River*. It’s an estuary, where the ocean meets the river, and the river stays salty for several miles inland. Megan has canoed up the river with L, my haybale hair stylist, and says it’s amazing, very peaceful and lots of wildlife. One of these days we’ll have to do that.

Even though it was a warm day, country warm is not the same as city warm. There’s always a breeze here, and when you go inside, the house is cool, being shaded by redwoods. Also I think the heat bouncing off all the sidewalks and roads and cars in the city makes things hotter, but this is just one of my theories. At the beach, there was a cool sea breeze, which was very refreshing.

You can see below why the rocky Mendocino coast is often the body double for the rocky New England coast: 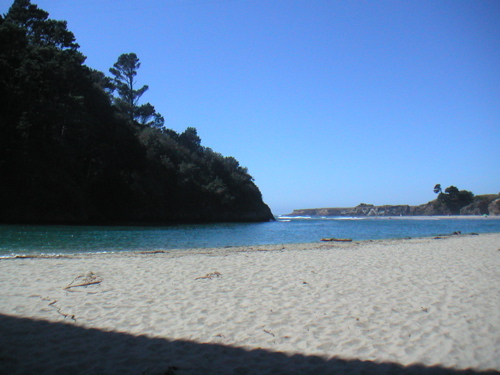 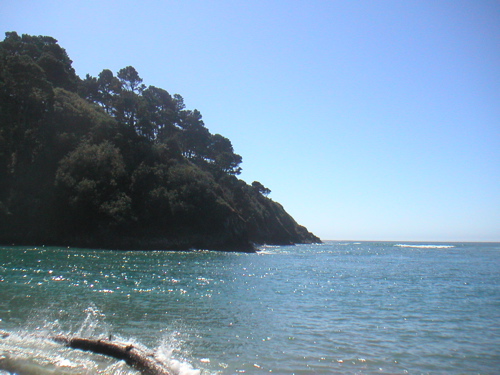 Schatzi waded happily in the water, and when she came out, immediately rolled around in the sand. It was caked all over her nose, and she looked hilarious. I tried to get a picture, but she shook it off too quickly – all over us. Fortunately, she dries almost instantly.

We stopped at the Little River deli to get frozen strawberry lemonade for us and turkey jerky for Schatzi. Treats all round! The cashier recognized Megan from the fire last year, when she and Jonathan responded to the 911 call. This is a frequent occurrence, even when she’s out of uniform. My favorite is when she met a guy at the Albion store and said, “Nice to see you upright!” as she passed him in the aisle.

*Fun fact: Big River was named for the size of the trees on its shores, not for its breadth.