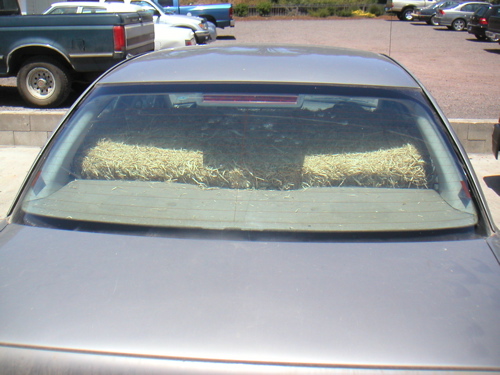 On our way home, we stopped off and bought a bale of straw. Little did I know that there is a difference between hay and straw, and that there would be a choice of straw. Whenever I run an errand for my brother, I’m always lacking an essential piece of information, so it’s good I had my little purple cell phone handy.

The winning straw was rice! Though fairly modest in size compared to some of the bales on offer, it refused to fit into the trunk of my sister’s trusty and dusty Saturn. But it did settle nicely into the back seat (see above). The straw seller kindly placed a sheet of paper on the seat before depositing the bale, but the car, our hair, and our clothes were soon as straw-strewn as the March Hare on a particularly maddening day.

If you’re wondering why our brother required a single, smallish straw bale, it’s because he’s planning to build a cob oven with the straw and the clay on the property. If you’re curious about these ovens, you can read all about them here.

We unloaded the straw and other BBQ fixin’s at his place, then went on to Megan’s. I stowed the groceries while she created the pie. She makes them so quickly it looks like a breeze. She does something with almond meal that makes the crust magically delicious. And with four pints of fresh local strawberries going into her pie, you can see that she doesn’t hold back.

Pie perched precariously on my lap, and Schatzi in the now vacant backseat, we made our way to our brother’s place. Friends gradually assembled, including Lichen, who brought Schatzi’s good friend Padawan. They play together at least once a week. Padawan is another terrifying breed, a Rottweiler who immediately cuddled up to me, then lay down and allowed me to rub his tummy until my arm felt like I’d pitched ten innings. I guess that’s the real danger!

As Padawan and Schatzi ran off to play, I perched on the straw bale while Lichen cut my hair. He had the cape and the fancy scissors and everything. It turns out that he used to be a stylist in Beverly Hills in a former life, working his magic on stars and starlets. I bet they never had their cut on a straw bale! He refused to let me pay him, even though my hair looks Hollywood fabulous.

In the meantime, my brother was barbecuing free range chicken breasts and farmers’ (thank you, Mike!) market corn, so dinner was ready. There was also salad and cheese buns which my brother had made earlier. For dessert, there was the pie.

As we sat around the dying flames of the barbecue, with the sun dipping lower in the sky, I thought how lucky I am to have such a wonderful family and friends.