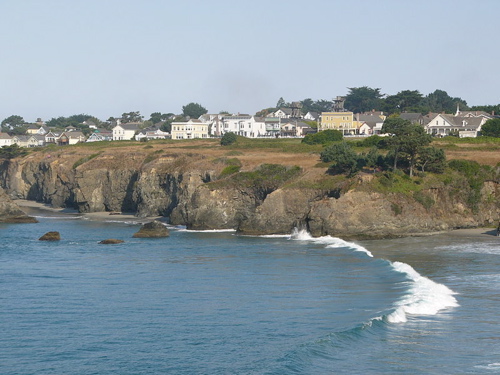 The beautiful village of Mendocino

Still dog-dazzied, we headed to the Mendocino farmer’s market.

It’s hard to imagine a more idyllic setting. For those of you who are unfamiliar with this romantic village, it’s on a rocky headland, jutting out into the rocky Pacific ocean. The village was established in 1850, and if you look at the photo above, you will see that it hasn’t changed much over the years. All telephone wires are buried, and fast food stores and chain stores are banned. The Historical Society (or Hysterical Society, as some of the locals refer to it) is diligent about preserving the Victorian look of the town. It is generally considered one of the most beautiful towns in America, and frequently stands in for New England in movies and television shows, notably Murder, She Wrote.

The farmer’s market (I never know if it should be farmer’s or farmers’ – does anyone more grammatically correct know which is right?) takes place every Friday on one of the quaint streets overlooking the sea. With her big basket over her arm, my sister expertly steered me to the best vendors for strawberries (four pints, destined to become a pie), carrots, heirloom tomatoes, fresh spinach, spicy garlic, and my favorite soap from Lovers Lane Farm.

Megan asked the carrot vendor about “the fruit people”. He smiled and pointed across the road, and off we went. On the way across the street, my sister explained that farmer’s market politics had dictated that the Fruit People couldn’t be part of the regular market because they came all the way from Fresno. Her opinion was that if they wanted to drive a couple of hundred miles to sell their fruit, that was their business. Also Fresno is hotter and sunnier than the coast, so their peaches, etc. are much better quality.

The Fruit People were swarmed, locals welcoming them back. The other vendors had circulated a petition to ask for their return. Apparently they had the correct permits and all was well. We got both white and yellow peaches, fresh almonds, and some dried fruit. Everything was delicious. Our basket and my Chico bag were overflowing, so we headed back to the car to go home and get ready for that night’s barbecue.

Up next: the barbecue and the hay bale haircut!