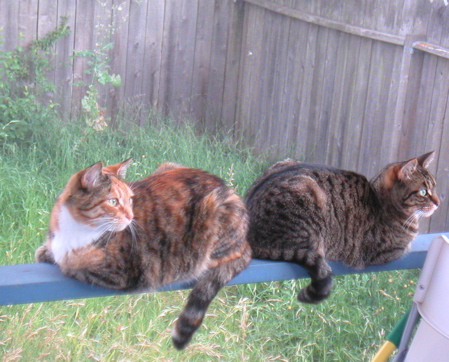 It looks like the girls are outside and unattended, but actually the porch is screened in. It does give them the best of both worlds: they can be “outside” and keep an eye on Henry, while staying safe. It also keeps them from fighting with Henry, though they hiss at him when he walks by.

Henry seems to be remarkably peace-loving for a cat with a torn ear and scarred nose. He disdains arguing with the girls, displaying a splendid indifference to their insults, and when other cats eat his food, he lets me shoo them away.

I wonder if Henry misses living on the porch the way he does in the winter. I thought about leaving the door open for him at night, so he could sleep on the couch, but decided it would be too confusing. All or nothing is probably best in this case.