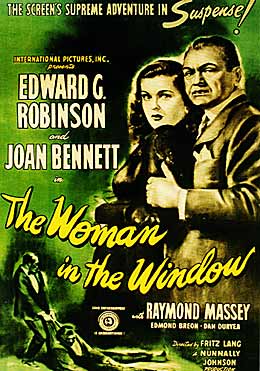 What with life exploding earlier this month, I managed to miss the whole Film Noir Festival. Yet another reason, as if we needed one, to hate 2009. So I decided to have a mini festival of my own. While my living room is considerably less lovely than the Castro Theater, and is entirely deficient in live organ music*, the parking is easier. And since it’s been raining steadily for several days (we’re finally at 90% of “normal” rainfall! Yay!), the atmosphere was just right.

First up was The Woman in the Window, starring Edward G. Robinson and the lovely Joan Bennett, who played a femme fatale in real life** as well as on screen, and directed by the fabulous Fritz Lang.

Edward G. plays a psychology professor instead of a heavy, for a fun change of pace. His wife and children leave him unattended in the city for the summer, allowing a mysterious beauty to mess up his previously placid existence, much like Tom Ewell in The Seven Year Itch, though with less comic results. He sees a portrait of a beautiful woman in a shop window one evening, and is amazed to see the painting’s smiling subject reflected in the glass. He turns around, and there she is. He decides to break out of his middle-aged routine and take the model out for a drink. Or two. And rather than inviting her back to his place to see his etchings, she invites him back to hers to see sketches of her.

Once ensconced in her elegant apartment, the evening’s entertainment is rudely interrupted by the model’s friendly neighborhood blackmailer, who makes the mistake of attacking her in the professor’s presence. Robinson may not be playing a heavy in this movie, but he still has skills, and as he puts it, “There are only three ways to deal with a blackmailer. You can pay him and pay him and pay him until you’re penniless. Or you can call the police yourself and let your secret be known to the world. Or you can kill him.”

The suspense builds until the surprise ending. An enjoyable little gem, and I can see why Lang re-teamed them in Scarlet Street, one of his noir best, which would be the ideal double bill with The Woman in the Window.

Next: why hitch-hiking is very bad for you.

*If I ran the hockey world, there would only be cheesy organ music at games, instead of bits of TV theme songs. The score would always be on your TV screen, even during replays. Also, no ads on the boards or ice, better outfits for the players, no more hideous art all over goalies’ helmets, and every team would have cute Ice Girls like the Islanders do. Oh, and no Corporate Name Arenas.

**A few years after this movie was made, Joan Bennett’s husband shot and wounded her agent, mistakenly believing they were having an affair. The scandal essentially destroyed Joan’s career, though, oddly, not her marriage, which survived another 15 years after the shooting.