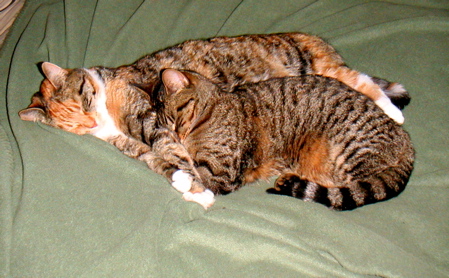 Honestly, when the kittens are asleep, it’s hard to believe they are as naughty as they are when they’re awake. When I see them all cuddled up together like this, I feel all warm and mushy inside.

Apparently the cats don’t feel the same way about me.

But, as usual, the best failed to materialize. The kitties were up, and clearly thought I should be*, too. They walked on me, with special emphasis on the soft and painful spots. Audrey chewed my hair and licked** my forehead with her sandpaper tongue, while June pursued her eating disorder of chewing on the power bar the lamps are plugged into (fortunately switched off in my Scrooge-like cheapness) and the metal doorstop. A pen hit the floor and was enthusiastically batted around in the hard, clacky wood. The metal blinds on the windows behind the bed clanged as the girls played a rousing game of tetherball with them.

I’ll delete the expletives I invoked as I stumbled out of bed toward the beacon of hope that is the coffeemaker.

I know you’re thinking that I should simply shut the bedroom door. But the bedroom door is not one of the two doors (front and back) that actually close in this house. Even the cupboards in the kitchen don’t close properly. According to my brother-in-law, the former carpenter, it’s because their current hinges are the wrong size.

At least I can close and lock the front and back doors. Even if I can’t sleep. Or make the kitties behave.

Update: I wish June would explain the physics of the litter box to her little sister. Although June has a dashing litter box style, spraying litter with drama all over the laundry room, Audrey apparently thinks that clawing the washer will be effective, all evidence to the contrary. So I get the full effect of the poo, as well as the delightful sound of claws on metal. Isn’t this supposed to be instinctive?

*When my brother was very young, he used to get up by 6 am every morning and call out merrily at the top of his voice “Is anybody up?!” They were then. He still gets up early, but now he keeps that news to himself. Mostly.

**Audrey is always licking me, and I kind of hate it, to tell you the truth. While I find it charming when they bathe each other, I find it charm-free when applied to Self. I should have named her Licorice.