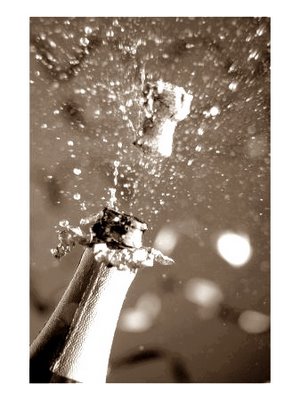 Belated happy new year, everyone! It’s no less sincere for being fashionably late. Many of you probably think the lateness is due to the traditional New Year’s hangover, but it’s actually just sloth. And no, I haven’t resolved to be less lazy this year, since there’s no chance I could actually keep that one.

In fact, my glamorous niece informs me that having resolutions could be hazardous to one’s health. What a fabulous reason not to have any! I’m going to be healthier by not having any resolutions!

It was a quiet New Year’s Eve. I sipped Piper Sonoma by the light of the sparkly white tree and glow of the white candles in the fireplace. I watched the 100th ball drop in New York (how could I resist the world’s biggest piece of Waterford crystal?), but dropped the ball on west coast midnight. I realized I had missed the witching hour when I heard people out in the street tooting little horns and calling out new year’s greetings with the muffled sound of fog-bound fireworks in the background.

The new year certainly started off with a bang at my local BART station. I’m starting to think about moving, especially after being in downtown Oakland on New Year’s Day (where I actually got some good Chinese food! Yay!) and enjoying the beautiful old buildings and the bustling atmosphere. I’m a city girl at heart, and though I can’t afford San Francisco, I may be able to find a place in downtown Oakland where I’ll be happier.

As I strolled through Chinatown and admired the Victorians by the lake, it occurred to me that I’ve lived here a year and still know next to nothing about this city. So I’ve decided to live dangerously in 2009 and resolve to get to know Oakland better.

My other resolution is to write more. I’d like to ask for your help with this one. I seem to be lacking inspiration at times after nearly eight years of blogging, so let me know if you have some ideas. Is there anything you’d like me to write about? Questions? Suggestions? Leave them in the comments, or email me at speakall at earthlink dot net. Thanks for reading all these years, and may this new one be a fabulous one for us all!