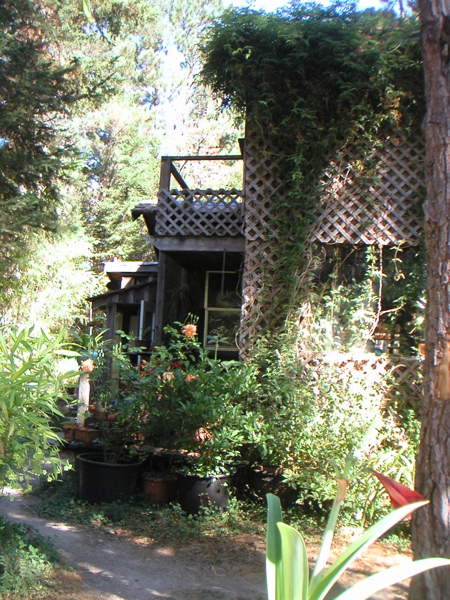 Well, this time last Friday, I was waiting for the traffic to (hopefully) subside before setting out to visit my brother and sister. I left the house at 7 pm, and while the traffic was fine – no noticeable Santa Rosa slowdown, possibly for the first time ever – it was, you know, dark.

Now, people will tell you that it’s better or even easier driving in the dark, because you can see the lights of the other cars. What they neglect to point out is that you will suddenly be faced with those halogen headlights in the pitch darkness, temporarily blinded while going around one of the many, many blind curves of Highway 128 – downhill.

And then there was the tule fog on the road leading to my brother’s and sister’s tumultuous dirt driveway, which looked like giant billowy ghosts throwing themselves at the windshield. It would be suicidal if they weren’t already dead.

By the time I finally arrived (sometime after 11 pm), I needed a bottle of wine administered almost immediately. For medicinal purposes, you understand.

When I finally woke up and got caffeinated the next day, my brother had been at work on my car for a couple of hours. I’m not sure if I mentioned this earlier, but the car had been peeing on the driveway from time to time, even though the dealer had assured me it was potty trained. So my brother had asked me to buy some parts and bring them up, which I did. However, it turned out that he needed more parts. He took the old ones out and put them in a bag for visual aids.

My sister and I went to the car parts store with the bag’o’stuff. The car parts guy immediately started asking us questions about the car in general and the parts in particular. My sister and I both had big question marks over our heads, so we called our brother and handed the phone to the guy, so they could talk boy to boy. The right parts were identified and paid for, and we went off to buy things for dinner at the delightful Harvest Market.

While we were perusing the aisles, I noticed they had Jelly Bellies, which my brother loves. We got him a bag of his favorites, and presented it to him along with the car parts. He was more delighted with them than I thought he would be. I mean, a bag of jelly beans for a day’s work on a car that isn’t even yours seems like a pretty sad deal for the mechanic. But he was happy to fix my car so it was safe (among other things, my thermostat was exploderated, so I had been driving around with little bits floating around in there. Ignorance really can be bliss) and took it for a test drive with my wonderful brother-in-law, who was his co-mechanic.

So far, so good. As it happens, my brother will be in town tomorrow and will do an inspection. And have dinner with a very grateful sister.