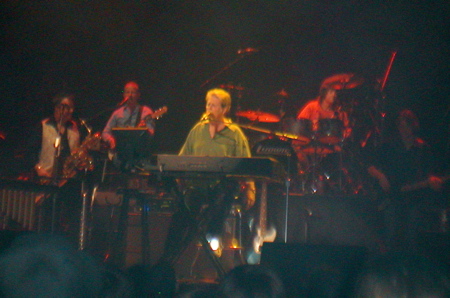 Brian Wilson at the Paramount Theater

First things first: the heat wave has receded, replaced by still sunny skies with refreshing breezes, and not a moment too soon.

While still in its mighty grip, I went to see the great Brian Wilson on Friday night. It was an all-around fabulous experience because:

At 66, Brian just released his latest album, That Lucky Old Sun, last week to rave reviews. I’ve seen him play several times over the past few years, notably performing his masterpiece, SMiLE, and I’ve never seen him so relaxed and happy. The only flaw was a slight problem with the video part of one song, but this was the beginning* of the US tour, so such minor issues can be overlooked.

All in all, it was a magical evening.

*Naturally, he decided to start the tour here since I now live here!