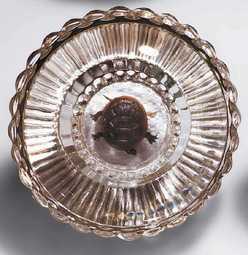 My weekend has been extremely glamorous so far. Yesterday, I poured boiling water on the weeds in the driveway, in an attempt to put them out of their misery before I yanked them out of the driveway. It’s harder than you’d think.

While waiting for the water to boil, I tackled the huge box of my grandmother’s junk, kindly hauled to my house personally by my sister Megan (who finally commented on my blog! Yay!). As I dug through the musty paper, I couldn’t help but wonder: how many Jell-O molds* and relish dishes does a girl really need? While pondering the inadvisability of naming a child Otis Clapp (as featured on a medicine bottle – possible slogan: Get the Clapp!), I unwrapped something that seemed to be moving. Eeek! Could something have survived in storage all those years?

But no, it turned out to be the creepy turtle paperweight, as pictured above. Not pictured: the moving head and legs. Apparently other people are not creeped out by the turtle, since research revealed that people have paid $400 to $600 for these at auction. One girl’s creep-out is another girl’s treasure.

Naturally, I had to call my sister to tell her of my run-in with the un-alive, yet overly active turtle. And as usual, she trumped my creepy story with one of her own.

Getting ready to do the dishes, Megan found the sponge hiding coyly in the depths of the sink. On wringing it out, it appeared that the sponge had a quite sizable poop on it. Naturally, she dropped it in horror, and was even more horrified to see the turd moving. On closer examination, it turned out to be a small bat, which flopped its traumatized way under the stove. Later, it emerged and my brother-in-law Rob caught it under a glass and set it outside, to the relief of all concerned.

*So far, I haven’t come across the Liberty Bell or the lobster, which I love. I have found the star one, which often contained the orange Jell-O with shredded carrots in it, and sometimes the red Jell-O with canned fruit cocktail. The green Jell-O with halved green grapes and ginger ale was generally reserved for the Liberty Bell.