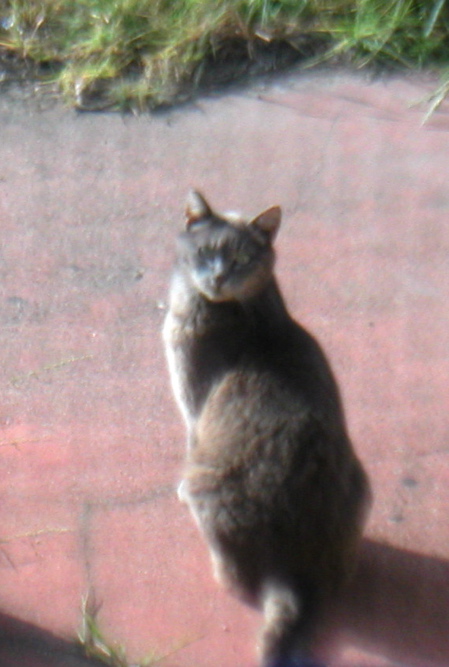 It turns out Grey Cat’s name is Henry. Every morning, he’s waiting for me to appear with food, water, and sparkling monologue, our conversation being rather one-sided.

He used to run away. Then he started watching carefully from a distance. Then one day, he answered my remarks with a few observations of his own. He has the manly sort of voice you’d expect. A few days later, not only did he keep up his end of the conversation, but he walked toward me, slipped past to get to his dishes under the porch, and started eating while I was still there.

I was incredibly excited.

Lately, he’s been spending more time in the backyard, lounging or napping with his back against the fence like a Mafioso (and probably for the same reason). Somehow, he manages to look alert even when he’s asleep.

The girls are jealous and on constant Henry watch, even though I have assured them he’s never coming in the house. When I hear their paws hit the floor and scurry from window to window, I know there’s been a Henry sighting. He, of course, is supremely indifferent to them.

I asked my former neighbor if she has a 365 day return policy on the kittens (they will be a year old on July 2). Audrey has been most unsatisfactory recently:

She’s now sleeping off the effects of overindulging in overnaughtiness, and I’m wondering if it’s too early for a drink.

*It’s a pretty bad picture, being taken through my window, but it’s all I have. So far.