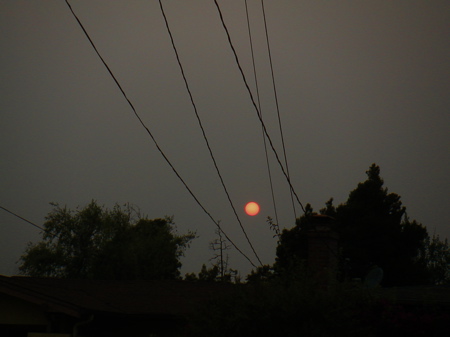 The red sun against the smoky Oakland sky, Thursday evening

My brother and sister’s Summer Solstice party was suddenly ended by an unexpected and wildly out of season rain-free lightning storm. There were thousands of lightning strikes, setting the dry trees and shrubs on fire. California usually only gets rain in the winter, so wildfires are a real danger every summer.

I am proud to say that my brother has been a member of the local volunteer fire department for many years. He sleeps with his boots beside his bed, and never leaves home without his pager. He and his fellow fire fighters leapt into action. My sister went down to the firehouse to make food and wash the tired men’s sweaty, sooty clothes as they cycled in and out of the relentless flames.

She called me with updates, and for a while each was scarier than the last. At one point, my brother called from the front lines and told her to pack up all the essentials from both houses and get ready to evacuate. Fortunately, the wind shifted and spared them, leaving their houses and gardens coated in ash, like a light snowfall. I have rarely been so frightened or felt so helpless, 150 miles away from where my siblings could be losing their houses – and in my brother’s case, his life.

I am so incredibly thankful that they are safe and sound, though the fires rage on. One hundred and twenty one fires have burned 42 acres and threatened 900 homes in their county. Fellow firemen from Nevada and Oregon have come to help. The skies here are still hazy with smoke.

Have you thanked your fire department today?

When my brother came off a 24 hour shift this week, he found a thank you note in his car – along with $50, a bag of cherries, and some chocolate. All along the roads, there are signs telling the fire department “We love you!” “Thank you!” – and the amounts of water available on that particular property, with directions for the fire department to take what they need. And the lone grocery store is taking donations. Nothing like a small town, especially one with such heart.