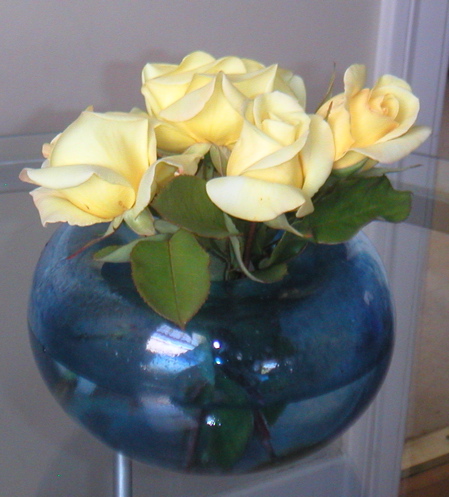 I picked the roses from a bush in my back yard yesterday. I soon discovered that Guns N’ Roses are 100% accurate and every rose does indeed have a thorn, and its whole point in life is to point it into you. I minimized the damage to Self by holding them carefully by the leaves. Here you see them looking perfectly innocent, in a vase made by my former neighbor, the swooningly handsome Aaron.

This morning, the cats were cutely sniffing the blooms, but by the time I grabbed the camera to document the adorability, June was trying to eat them. So I had to shoo them away, but I still found a lightly mangled bloom on the kitchen floor later.

They miss no opportunity to be naughty. I didn’t even realize a vase of flowers was an opportunity.

Besides arranging flowers, I did two loads of laundry* yesterday, and not much else, because it was hot (still 83 degrees in the house at 11:30 pm) and I was more slothful than usual after my busy week. Two full days of conferences is like a flashback to high school. I was sitting there in my uncomfortable clothes, listening to various Suit Guys drone on while my mind wandered. If I had to be at the Four Seasons, why wasn’t I in the spa? Or ensconced in a suite? When can I sneak out of here? Has my watch stopped completely? During lunch and recess, you had to chat animatedly with the popular kids. Fortunately my complete ignorance of golf excused me from having to go to a second location. We all know how dangerous that is.

On Friday, I had meetings at the office in the city (I think I went to the city 4 out of 5 days last week, and I’m beginning to think of it as the three hour tour. My rescue appears to be equally unlikely) and a date with Mr. Wayne Shorter at 8:00. With a little time to kill between appointments, I did some shopping until it was time for dinner.

I stopped into a fancy bookshop. I found a lovely birthday card for my sister, a couple of other cards, and was unable to resist the latest Us and People with headlines about Beyoncé’s secret wedding. When I took my haul up to the cash, the fashionable cashier looked at me with disdain, which I enjoyed like a secret wedding. I even asked her to put them in a bag, which she did with visible horror. I enjoyed that, too. It?s fun to be perverse sometimes.

Wayne Shorter is celebrating his 75th birthday this year, but you’d never know it. He is as amazing as you’d expect from a guy who played with Miles Davis and Art Blakey and co-founded Weather Report. This evening was the US d?but of a piece he wrote for the Imani Strings, and it was breathtaking. It’s been a real honor to have been in the presence of three legends in the short space of a week. I’m pretty sure this coming week will be a lot less eventful.

*I found three separate dollar bills, all curled up coke style, in the dryer. Somehow they seemed like extra money, or in nature of a tip.