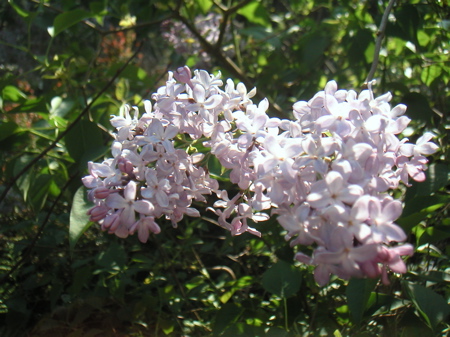 Lilacs in my sister’s garden

Country walks always sound good until I actually go on one. I have noticed the same thing about herbal tea – well, pretty much all tea. It sounds delicious but is actually not. Unlike, say, an espresso. Or a glass of wine. So I like the idea of strolling through the primeval redwoods with the people I love most, but the reality is more like slipping and scrabbling through the dirt and fallen needles while complaining bitterly. And sweating. Ick.

Nature is gross. Shopping is so much better.

Actually, there was a little bit of fun shopping, at Tangents in Fort Bragg (which I usually refer to as “the cute store”), but it was mostly errands, like the Safeway. At the Safeway, I was horrified to note premixed cans of beer and Clamato juice. What the…

Not even a country slip’n’slide could make that seem like a good idea.

And of course, I had lunch at the Hamburger Ranch and Pasta Farm. Did you even have to ask?

When I got home, I discovered that I could not get into my house. The lock just kept turning around and around, but refused to unlock. I ended up climbing in one of the living room windows. I don’t know whether I should be relieved or disappointed that no-one called the ever-present po-lice on me. Hmmm.

I called the locksmith, who came over right away and changed the locks. He thought they were probably original, 85 years old, so no wonder they died. He suggested getting locks for the living room windows (you think?), which, on closer inspection, turned out to be the only room in the house that was lock-free. Not even a trace of ghosts of locks past on the four windows. Hmmm.

Getting window locks is now a matter of some urgency, since I’m going to Florida on Saturday for a conference. Now I know from personal experience that the windows can be climbed through with impunity, it makes me a little nervous.