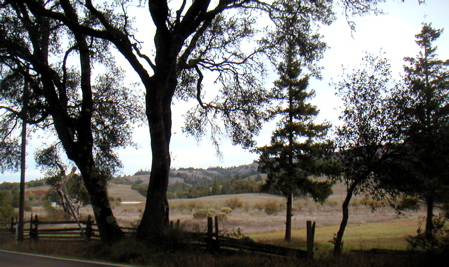 It turns out that traffic was the least of my T-Day travel worries.

Note to self: taking kittens on a road trip is not a good idea. Audrey pooed with horror on the way up, so I pulled over and tossed the towel from her carrier at a gas station in Oakland, where a guy asked me for money for brown sugar, on account of his mother was coming all the way from Louisiana for Thanksgiving and he was making a ham. I gave him a dollar to leave me alone while I wrestled with the gas pump, and surprisingly, noticed him asking someone else for brown sugar money while I was filling up the car. Either hams need a lot of brown sugar, or “brown sugar” means something else, like crack or Ripple.

Same deal on the way back, except she also barfed, making my roadside clean-up somewhere on 128 oh so fun. June, on the other hand, was perfect. Did I mention Audrey’s non stop meowing “Are we there yet?” for four hours?

On the bright side, traffic was minimal, and I didn’t even experience the traditional Santa Rosa Slowdown. My little sister’s little house in the big woods was full of friends, family and food. One of our friends had brought along her father, known as Tubby to one and all, despite not being particularly tubby. Things I learned about Tubby over Thanksgiving dinner:

After the huge dinner and 9 thousand glasses of wine, repaired with Tubby and other guests to a neighbor’s house, which is vacant due to her current sojourn in prison. Possibly she is Tubby’s soulmate. Slept, if you can call it that, on the floor since there was no room at my sister’s house. Tubby’s snoring preferable to Tubby’s talking.

The next day, I called the movers and was told that my stuff wouldn’t get here until December 3 at the earliest. Why, you ask, when it was picked up Nov. 15? Because the geographically challenged idiots at the moving company sent the driver to Cincinnati, then Kentucky, and now he’s on his way to…Boston. I burst into tears. Decided to borrow an air mattress and blankets and just camp out in the house I’ve been paying rent on since Nov. 10. I guess all moves have their problems. I just wish they weren’t mine.