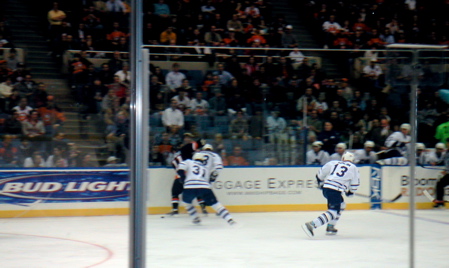 For some reason, some of us thought it would be a good idea to go to a hockey game the night before a day of meetings. This is what happens when all your co-workers are boys.

The game was in some distant, godforsaken place in Long Island. Before this, the only place I’d been to in Long Island was the Hamptons, and I’d recommend you keep it that way if you can. If you must venture to the dark side, be prepared, especially if you take the LIRR at about 5:30 in the afternoon.

Arriving at Penn Station after spending almost half an hour getting a cab (note: looking for a cab at 5:00 in midtown Manhattan is an exercise in both futility and frustration), I was horrified by the sight of all the people pouring into its narrow entrance, oddly located directly beneath Madison Square Garden. It looked like a giant anthill. I wanted to turn and flee, but braver hearts prevailed.

The worst was yet to come.

We shoehorned ourselves aboard the train. Trains are usually the most civilized way to travel, but not the LIRR*, and not at rush hour. It was standing room only in a manner that makes a sardine can look roomy. People stepped on my feet, hit me in the head with backpacks, hollered into their cellphones in unmellifluous accents. It was a long way to Westbury.

Took a cab to the Coliseum, which, as previously noted, is located in the middle of nowhere (or possibly the suburbs of nowhere). I still don’t know where it was. The Islanders defeated the Maple Leafs (no-one seems to know why it’s the Leafs and not the Leaves. It just is), but it took several hours, the game going to a shoot-out. For the uninitiated, that means they played all three regular periods, an overtime one, and had to resort to the shoot-out to decide who won, the scores being tied.

Leaving the stadium, I called the taxi company, and was told there’d be a taxi rank on the west side. Got directions to the west side. No taxi rank, but valet parking. The valet parkers said the taxis were on the other side of the building. Decided that it would be better to try the Marriott across the street, so we plodded across the vast concrete steppe in the cold rain and wind, only to discover that there were no cabs at the Marriott, only 30 or so disgruntled Leafs fans (the Islander aficionados all drove, of course).

It took 45 minutes to get a cab, and the trains only run once an hour at that late hour, so, yes, we missed it. For added fun, the station is locked at 6:00, so we had to stand out on the freezing platform and wait for the next train.

I searched my pockets for my gloves, and discovered one was missing. It was my favorite pair: buttery soft black leather, lined with cashmere, and adorned with two rows of tiny, pale pink suede bows. Italian, of course.

When I was a child, I was going somewhere by train with my father, somewhere in England. I don’t remember the details of the trip, but I vividly remember this: as the train pulled out of the station, the elegantly dressed woman sitting across from us looked out the train window and noticed her glove lying on the platform. She jumped to her feet, pulled open the window, and tossed the remaining glove to join its mate.

*When I complained about this to my colleague who lives in civilized Irvington, on the civilized Hudson rail line, he sniffed and said very seriously of the LIRR riders, “They’re animals“.