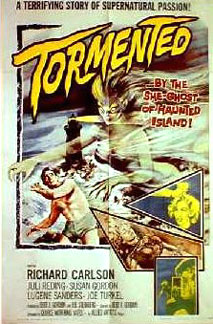 A week before his wedding to Dull But Wealthy Meg, played by Lugene “They Don’t Name ‘Em Like That Outside of Oklahoma” Sanders (her claim to later fame was being the replacement Dull Good Daughter on TV’s Life of Riley), alleged jazz pianist Tom, played by Richard Carlson (also star of the B movie classic Creature from the Black Lagoon*), thinks it’s a good time to break up with his Other Woman, the Va-Va-Voom Vi, Juli Reding, she of the outstanding measurements of 40-23-35 at the time of filming. Leaving aside his motivation for dumping the temptress for the boring girl, he really needs to learn that casting the luscious lovely aside mere days before his wearisome wedding just isn’t a good idea. Maybe Emily Post could tell us the appropriate time that should elapse between ditching and wedding, but certainly a few days isn’t at all gentlemanly.

Vi will take a lot of things lying down, but being dumped ain’t one of them. She informs her former love that if he goes through with the wedding, her gift to the bride will be none other than a steamy packet of love letters Jazz Boy wrote her when their affair was hot’n’heavy. Unfortunately for Vi, Jazz Boy chose a lonely lighthouse as the breakup location, and in his typically gallant manner, also chooses not to save her when she falls off it into the cold, unforgiving sea. And hell hath no fury like a mistress scorned. Even if she doesn’t live, she can still tell the tale (or is tail?).

Vi proceeds to haunt the prospective bridegroom in memorable ways, such as her head appearing on a shelf and indulging in some post-mortem nagging. Guys, isn’t that one of your biggest fears?

What else but a seabreeze to go with a film where the Vixen falls to her doom off a lighthouse? Vodka, cranberry juice, grapefruit juice, with just a little bit of lime to hint at the bitterness of the jilted Vixen.

*I’m always reminded of Marilyn Monroe in The Seven Year Itch, when she goes to see that movie and muses, in her sweet little-girl voice, “But I just felt so sorry for the creature at the end. He was kinda scary-looking, but he wasn’t really all bad. I think he just craved a little affection – you know, a sense of being loved and needed and wanted.” So did she.