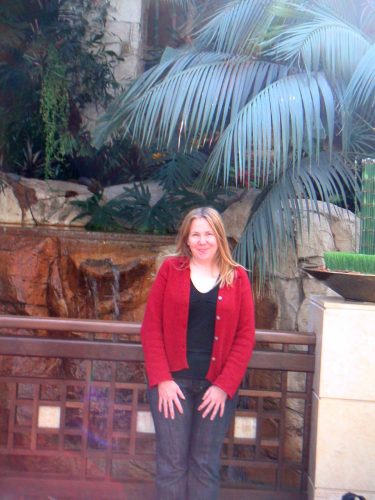 You never know what a Suzy* will get up to when you’re not looking! I will try not to lose all my money or marry an Elvis impersonator or become a showgirl, but I’m not promising anything!

It says right on it that Vegas is fabulous, and it is. Here are some fabulous things about Vegas:

– You have to love a place that’s known as Sin City. Everyone says, “What happens in Vegas, stays in Vegas.” Carte blanche to do whatever your evil little heart desires. After all, it stays in Vegas and never happened in the real world!

– Despite the Sin City nickname, the town was founded by Mormons and is still a heavily Mormon town, sin and all. Are you as surprised as I am?

– When I opened the drawer in my hotel room, seeking a phone book, I found the usual bible (even in Sin City – but then, maybe they need it even more there), and right beside it, the phone book opened to what is euphemistically called “Massage Services”.

– It’s not just for weddings anymore. You can get married *and* divorced there. Just ask Nicky Hilton. It’s a full-service town. So pick your marital status and go for it.

– Bugsy Siegel did not build the first casino, according to a native Las Vegan (Las Vegans are much more fun than plain Vegans, I find). He says that there were already two others, one built in 1905, and Siegel just paid the last 10% on a project that had stalled for lack of cash, and then took it over.

– There are still actual cigarette girls! They walk around perched on hazardously high heels with little trays full of cigarettes around their necks, which are perilously poised on their cleavage, which often precedes their arrival in a room by several inches.

– The Elvis-A-Rama museum, complete with, you guessed it, Elvis impersonators.

– The Strip, where I fell and acquired an unseemly scrape on my wrist and elbow, and several rainbow colored bruises. I seem to be gravitationally challenged. Or maybe it was those $1 Margaritas.

– The Neon Museum (most signs now are electric, not neon).

– You can rent a machine gun and merrily blast away at a target, imagining it to be your boss or your obnoxious neighbor, and then take the target home. Quite the unusual souvenir.

– When playing the Butt Game, I almost always won. Pretty much everyone’s butt is bigger than mine. Or yours.

– 24 hour everything, including shops for evening dresses and shoes. No more worrying about those late night fashion emergencies. ~Whew!~

– The people watching is some of the best on earth. Don’t forget the hotel pools, where you must wear full pool makeup and jewelry, and lots of it.

And now, some words of wisdom on leaving Las Vegas!

*Seen here in the indoor tropical rainforest at one of the casinos. I’m not kidding. And wearing no makeup! Very, very scary!

Note to self: Dang, girl! Do something about those roots!