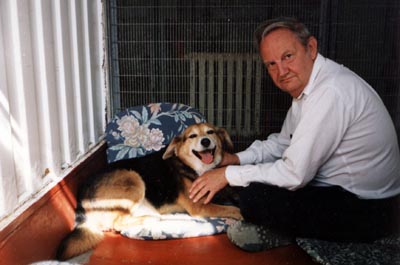 Just got off the phone from wishing him happy Father’s Day, even though he lives in England, where they don’t have Father’s Day. But after years of living in the US, he is rawther mid-Atlantic.

The picture here shows my Dad with his beloved dog Jesse, while Jesse was still enduring the archaic English torture known as quarantine. I believe that the quarantine is slowly being lifted, which is surely a necessity with the Channel Tunnel. Anyway, I visited Jesse while he was in durance vile, and as you can see from this picture, he didn’t find it all that bad. Dad could visit him as often as he liked and bring Jesse treats and bones to distract him when Dad was leaving. On the day Jesse was released, his joy was so uncontainable that it took 20 minutes before he calmed down enough to allow his collar to be put on. And for the rest of his life, Jesse lived as an English gentleman in leafy Wimbledon. Not bad for an abused, starved stray mutt my sister rescued in Newfoundland!

I see I have digressed from my original topic, though I think Dad wouldn’t mind, because he loved Jesse dearly. Jesse died just a few days before Dad’s second wedding, and he cried all the way to the Victoria Falls for the honeymoon. And in the five years that have passed, he still hasn’t gotten another dog, and I don’t think he ever will.

I am very lucky to have a father who is also my friend. We have many tastes in common and this has led to my being accused of being the favorite. I won’t confirm or deny this, but I will say, we understand each other. Happy Father’s Day, dear friend!